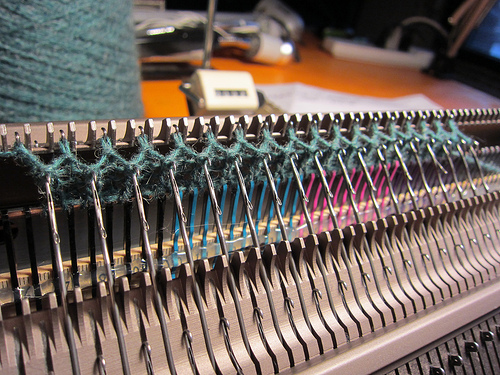 The White/Superba 1602 I purchased sadly did not include a full-bed cast on comb, which makes casting on things wider than swatches somewhat tricky. There are a few floating around eBay, but they all seem to be $50 and/or in France, and shipping a three foot long steel comb from France to the US isn’t particularly cheap. Also, I am impatient. I’m told that a knitting machine store in Toronto also has some, but again, impatient.

So I set out to make my own. The comb consists of small metal teeth which go in between each stitch, and a rod which is threaded through holes in the top of the teeth to trap generic propecia the yarn in place. I made a 12″ long test comb to see if it would work before committing to a whole yardstick worth of bobby pins and hot glue.

I purchased 4 packages of bobby pins and some wooden rulers at the local dollar store. I then arranged the bobby pins at 5mm intervals along the ruler, since the Superba machines are 5mm machines. I used a second ruler (they were 3 for $1!) to make sure the pins were all at an even height and that they retained their 5mm spacing. Then I ran a line of hot glue along both sides to hold things in place. To use the comb to cast on ribbing, you run the carriage/yarn across the needles to establish a zig-zag of yarn across the bed. Then you push the cast on comb up between each stitch, and run a rod through the top of the comb. This traps the yarn between the rod and the ruler below, letting you appropriately tension the yarn for the first row of stitches. As you knit, the comb pulls the fabric down between the two beds. A weight is attached to each end to provide tension. In this photo, I’ve lowered the front bed to make it easier to see what the comb is doing. You can just barely see the small copper rod at the bottom of the fabric. I used it to knit a gauge swatch for a sweater I plan on knitting soon. It’s a mini-cable rib pattern. The cables are worked by hand, which is pretty tedious though I’m slowly getting faster at it. My dollar store comb is by no means as good as the real thing, but it works pretty well for $2 worth of materials. It has a few key issues which make it a little tricker to use than a normal cast on comb. First, the end of the bobby pins are just a little bit too wide, I have to set the bed spacing all the way up to 6 in order to get them to fit through. Second, the bobby pins get in the way of the holes used to hang the weights. And my DIY comb is nowhere near as durable as the steel one. But it works well enough for now. 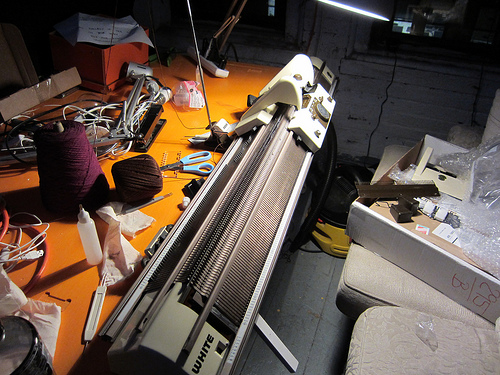 I don’t have a knitting machine problem, I could quit right now, I swear.

While working with my Toyota 747 I decided to try and find a ribber for it, which led me to the Ravelry Knitting Machine Sales group. I did not find a Toyota ribber, but I did find someone in Brooklyn who was selling a White/Superba 1602. He was selling it at a reduced price because the electronic selector box was not functioning. The Superba knitting machines, which were also sold under the brand names White, Singer, and Phildar, are really interesting machines. Instead of a main bed and an optional removable ribbing bed like most Japanese machines, the Superbas have two permanently fixed identical beds. This makes it much easier to get consistent, even ribbing.

Mechanically, the machine is in good shape. Stockinette stitch, ribbing, and jacquard patterning (done by manually moving the needles into place) all work well.

The selector box, which can be seen in Patrick’s photo stream, works by reading stitch patterns off mylar sheets. A photoresistor detects either a light or dark square and sends a signal to the machine which moves the needles accordingly.
In addition to maintaining a comprehensive site on Superba machines, Patrick also was kind enough to supply me with the users manual, service manual, exploded part diagrams, and logic flow charts for the electronics.

As soon as I opened up the machine and took out the circuit boards, it was clear things weren’t working properly: I superglued the board itself back together, and then used lumps of solder to repair the broken traces. Jumper wires would have been better, but admittedly I was too lazy to get up and find a spool of wire.

Once the traces were repaired, Phooky helped me test the output voltages. Since it takes in 110V mains power, I was nervous to start poking at it by myself. But we only made the electricity arc between the multimeter probes once. Have I mentioned that mains power is kind of terrifying?

Anyway, of the four pins that connect to the card edge, two are tied together to ground, and the other two provide 24v for the motor drive (which feeds the mylar sheets) as 12v for the COP420 microchip.

Speaking of the COP420, my first instinct was to try to get a firmware dump off the chip and try to reverse engineer the firmware. Not that I have any experience doing that, but luckily Trammell does. Unfortunately, he found out that the COP420 is a mask-programmed device, meaning that the program is put into ROM when the chip is created, in contrast to something like the Atmega chips used in Arduinos. If you’re lucky, the “test mode” on the chip was initially enabled, making it possible (if somewhat of a pain) to read out the firmware.

The more I think about it, the more it makes sense just to redesign the selector box from the ground up. Most of the bulk and power of the box is related to the scanning and advancing of the mylar cards, which are adorably archaic but not exactly convenient. A USB interface would be vastly preferable, and would cut down on about 2/3 of the circuit. I need to do some investigating to see if the whole thing could be USB powered, eliminating the need for a separate power cord and bulky transformer.

Yeah, ok, I have a knitting machine problem.