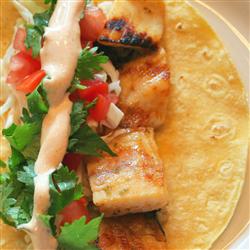 I’m taking two weeks to really focus on building good habits with my eating and exercising. Rather than obsess over the number on the scale I’m focusing on eating healthy, home cooked, from-scratch meals instead of eating out, and building up my strength and endurance.

I cooked four meals this week, three of them totally new to me. We had one restaurant dinner, one dinner at grandmom’s, and one night of leftovers.

Prior to this recipe the only fish I’ve ever cooked was baked salmon, and going into the store I honestly had no idea what tilapia even looked like. It looks like fish. Because it’s single-digit cold here at night this time of year, I baked the marinated tilapia chunks rather than grilling them. Since fish doesn’t keep well and the recipe serves 6 we invited a few friends over for dinner. It seemed like just the right amount of food for the four of us.

After reading a few reviews stating that the sauce was too hot, I cut the adobo sauce down to just 2 tsp. I fried the corn tortillas for a few seconds to warm them up before serving, and they were a huge hit. The fish tacos called for shredded cabbage but only used a few leaves, and a friend suggested I make cabbage rolls with the rest.  I wasn’t sure what time RD was getting home I made them in the slow cooker instead, leaving them on high for 4 hours.

The hardest part for me was getting the leaves off the head without ripping them. Larger leaves are easier to work with so next time I’ll cook the cabbage rolls on the first day and then use the smaller inside leaves for the tacos. The rolls were delicious but a little homogeneous. Next time I think I’ll serve them with rice instead of adding rice to the stuffing, and make sure to cook some fresh veggies to go with them. I tried to cheat this one by using store-bought curry paste, and it came out really bland. I’m not sure if it’s the brand I used (World Foods), the quantity (3 heaping tablespoons), or if curry paste just isn’t something you should use from a jar. It wasn’t bad, just boring, and I think I’ll try another brand before I go nuts trying to find all the curry ingredients in the local Asian supermarket. I added lean ground turkey to this vegetarian recipe, and quadrupled the recipe as we were having friends over for dinner. It was very well received, and two stuffed pepper halves each seemed like the right amount of food. No side dish needed, this is a nice all-in-one meal.