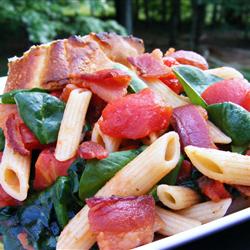 I didn’t take my own pictures this week, but I promise everything looked delicious. We had a snow storm, an ice storm, and my parents staying with us for two nights so there was a lot going on. It was tough to get all the cooking in but I managed to eek it out. RevolvingDork notoriously does not like nuts, but I followed the recipe as written for the topping. Surprisingly he didn’t mind the mixture of chopped nuts and breadcrumbs, and claimed it was the best salmon I’ve made. The breadcrumbs could easily be left out for a gluten-free meal.

Penne Pasta with Spinach and Bacon I made this for lunch since we had dinner plans with family. It’s a nice light quick option and reheats well. The only thing I dislike about it is the number of pots/pans used: a skillet, a saucepan, and then a huge serving bowl to combine it all. I made this as-written, and like many of the other reviewers I thought it came out too mushy and bland. I might try it again, but I think I’ll start with just the tomatoes / chicken / spices and add the veggies halfway through.

After two weeks of cooking I had various veggies odds and ends that were still good but wouldn’t be for much longer. It turns out these are great for pureed vegetable soup. I may be the last person on earth to learn how to make vegetable soup, but just in case here’s an outline of the process:

Pro tip: blend this in batches, filling your blender no more than 3/4ths full, and make sure there is room for air to escape so your blender lid doesn’t blow off. Place a dish towel over the lid in case anything escapes. After pureeing I returned the soup to the pot and fine tuned the seasoning and served it with brown rice.