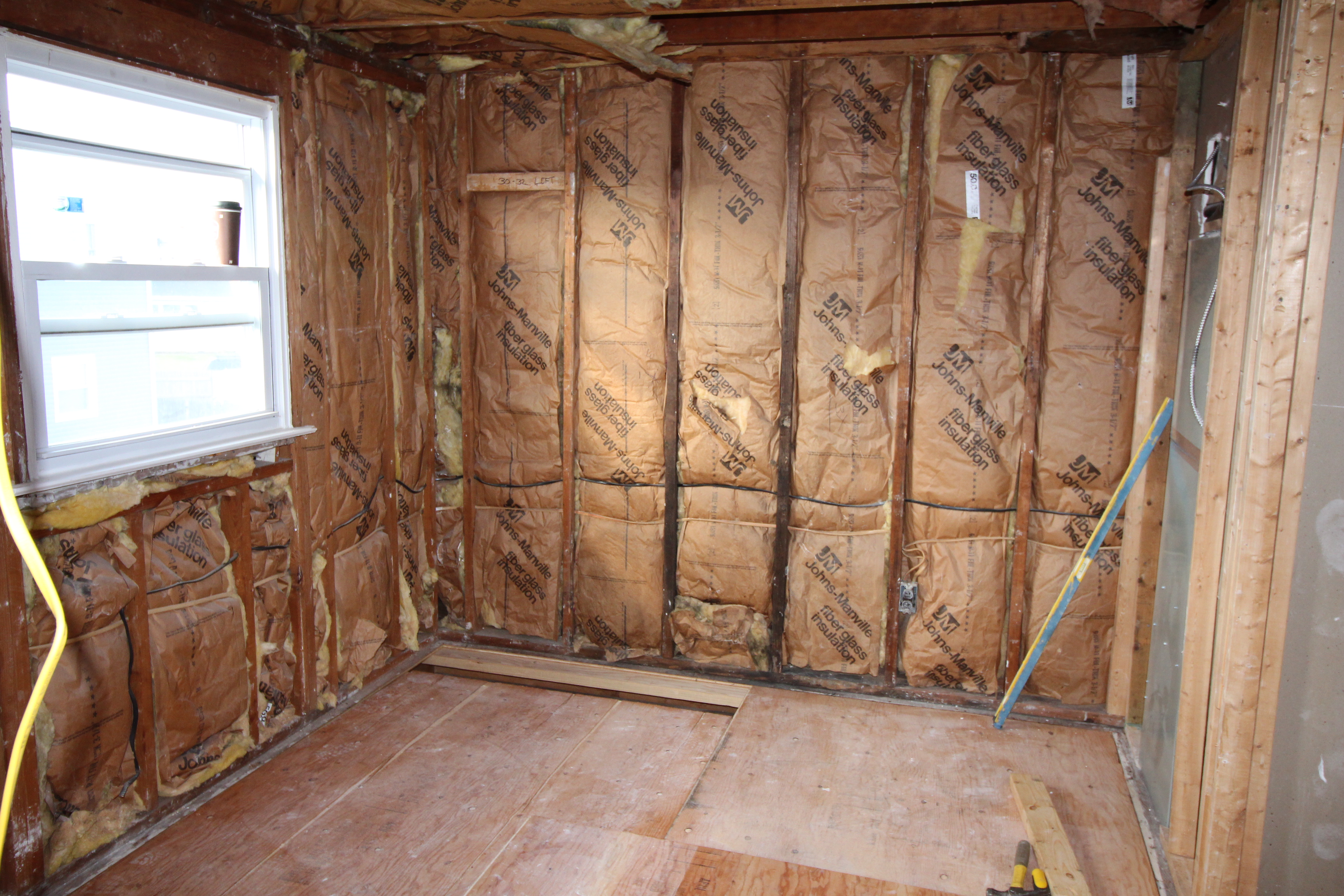 We’re about a week and a half into the bathroom project and demolition was, in a word, enlightening. Other words one might use include “complete horror show” and “dear god what were they thinking?” I’ll dive into the details in a second, but first let’s skip to the end and see where we’re at now:

You may notice something is missing. Something like… a wall. Or maybe you’ve forgotten, in which case let me jog your memory…

So yes, we removed a wall. Actually all the walls. And the floor. The whole room was gutted down to the studs and joists, and then we removed most of those as well.

You’ll notice in the ‘before’ photo that the wall between the landing and the bathroom is about a foot thick. Why? We weren’t sure. Maybe there was ducting running through it. Maybe it was full of treasure. Or bees. So we opened it up and found…

…Basically nothing. Well, we found a lot of questionable plumbing and electrical work. And the wall was framed with 2x3s. Badly. So it’s being torn out and replaced with a wall of more reasonable construction. We’ll gain about 8″ of space on the landing, which is nice. Downside is there will be a scar where the wall-to-wall carpet doesn’t cover, but that’s what area rugs are for.

In a rare bit of good news it turns out the reason the shower was 8″ off the ground is that the person who installed it merely had no idea what they were doing. The new shower will have no problem being installed at floor level.

The electrical situation in the bathroom (and in fact the entire top floor) was rough. Random wires were taped together inside walls, everything was running on one giant overloaded circuit, improperly terminated junction boxes… it made me really glad we’re doing this now, and also amazed that the entire house hasn’t gone up in flames sometime in the last 30 years.

All the electrical in (and really anywhere near) the bathroom is being completely removed and redone. On the plus side we’re getting some new outlets in the rooms adjacent to the bathroom.

With the walls out of the way it was time to open up the floor and find out why it was so saggy / bouncy / otherwise shitty. It turns out the answer was very simple… giant chunks were missing from every. single. joist.

Rather than cut holes through the joists, which would have required some basic skills, the original owner just notched them to make room for the drain lines. Which was especially impresive in the case of the toilet drain (far right), which was left with barely 2″ of material. It is amazing no one ever fell through.

We also found out why the pipes were leaking (which is what started this whole process). They weren’t glued together at all. Just dry fit and then covered in silicone at some point when they started to leak. A cookie sheet was found underneath the shower drain, presumably to catch water. Because that is how you solve problems!

To fix the issues every single joist was sistered with new lumber. Unfortunately due to how the HVAC closet cuts into the room this meant having to cut into the freshly painted sheet rock in the room below. Unsurprisingly, it was super moldy and gross on the inside. 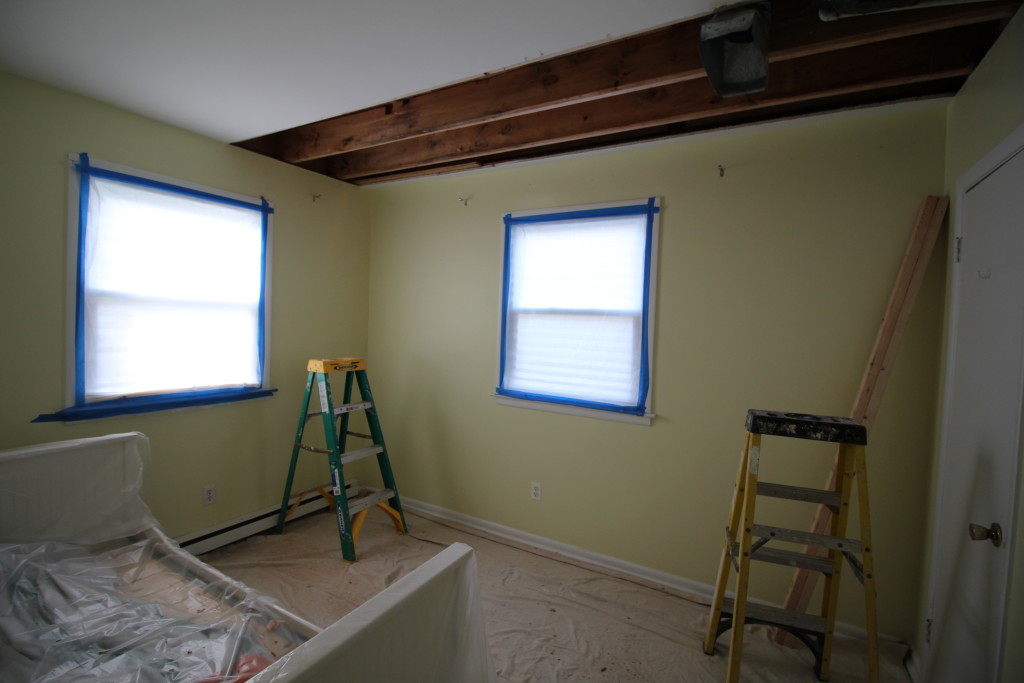 Moisture damage was a huge problem everywhere. The tile for the floor and for the shower were just installed over the plywood/drywall. The rotting subfloor has now been replaced but you can see the dark stains on the exterior wall studs from 30 years of water damage.

We made a decision to deviate from the original plan. Rather than put the shower on the outside corner next to the window we’re swapping it with the old closet. The shower will now butt up against the HVAC closet (which opens into the adjacent bedroom) and a combination cabinet / open shelving unit will be built between the shower and the exterior wall. The front of the shower will have a half-height wall to allow more light in. The main reason for doing this is to make the pipes easier to run, but it also allows us to make the shower whatever width we want without having to worry about running into the window.

Hopefully by the end of this week we’ll have walls and floors again. Not that I’m likely to see it, at this point I’m too pregnant to stray very far from Philly. I only went down today because my husband was able to come with me and I was sort of daring the baby to come. I am only mostly disappointed it didn’t.

3 thoughts on “Clean Slate in the Bathroom”