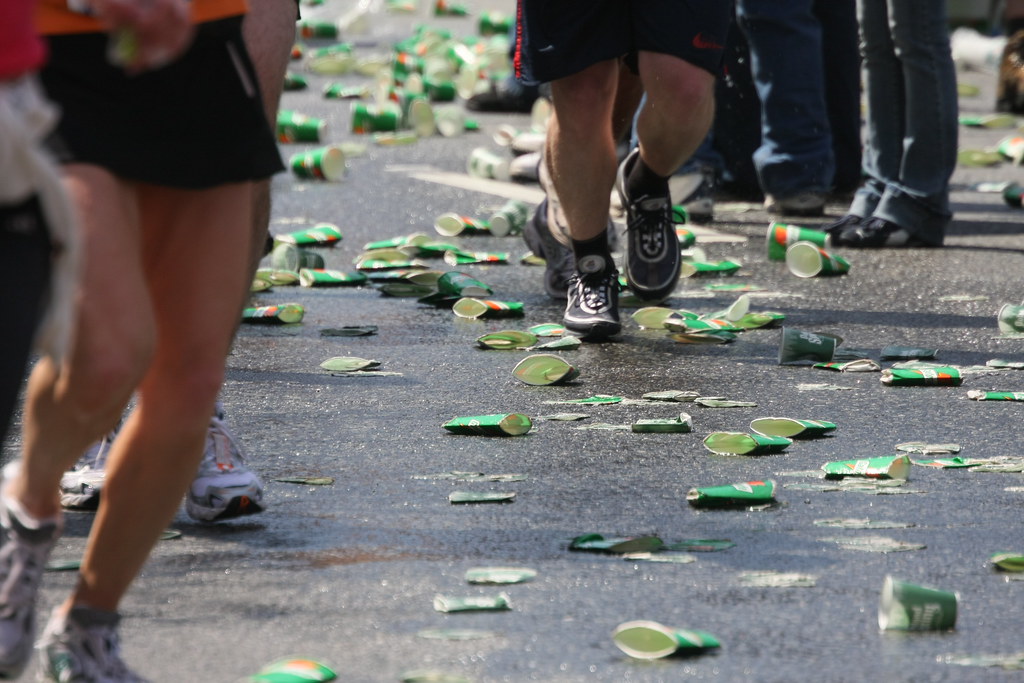 Anyone who has run in an organized race recognizes the flotsam and jetsam of a run: water cups, gel packets, and the occasional item of clothing. While the piles of Gatorade cups can be a little jarring to see, they are more or less working as designed. Runners jog by a water table where volunteers have lined up cups, drink their water, chuck the cup, and go on their way. Longer races will give out “fuel” of some kind; the current trend is calorie dense gels that supposedly are easier to digest than actual food. At the end of the race volunteers clean up all the cups and in theory everyone lives happily ever after.

In practice, the cups and gel packets stray. Half a mile down course from the water station you’ll find some errant cups, some mashed to the asphalt and some still rolling around. Maybe the wind carried them there, maybe the shuffling of thousands of feet kicked them there, or maybe someone just held them half a mile. Either way they’ve now escaped the territory of the volunteers and unless the race organizer is particularly diligent (most aren’t) will become part of the local ecosystem.

On Sunday afternoon following the Philadelphia Marathon I went for a run along Kelly Drive, part of the Fairmount Park system which runs along the Schuylkill River. I saw some form of race detritus roughly every 5 feet for the entire length of my 3.5 mile run. The worst offender by far was the Gu gel packets, little foil and plastic pouches now flattened all over the road and sidewalk. A few cups, a few socks, but mostly Gu. Unlike the cups, which are certainly still a problem, the Gu packets will never break down. They will never biodegrade and go away. Instead they’ll eventually get washed into the river, mixed into the Delaware river, and then either hang out in the Delaware bay or get whisked out to the Atlantic ocean to join the other 6.4 tons of garbage in the world’s oceans. Also, it’s ugly.

Despite being a runner myself I can’t help but feel that these marathoners came in, blocked my streets, trashed my city, and left. Don’t get me wrong, I appreciate the economic activity the race brings to the city. But after my run on Sunday I’m frankly feeling pretty bitter about the whole thing.  In order to make marathons and other major runs a more welcome addition to cities and not just garbage generating traffic jams, three things need to happen:

1. Runners need to learn to be less disgusting

I get it, I really do. When you’re running it’s hard to focus on whether or not your cup made it into the trash can (and often there isn’t one anyway). Tossing your cup on the ground is part of the culture. That’s fine. What’s not fine is carrying whatever it is for half a mile or a mile and then ditching it there. If you’re able to run with your ipod, water bottles, and all the other crap I routinely see distance runners strap to themselves, you can find somewhere to hold that empty foil pouch until you get to another volunteer station.

Speaking of the culture, the culture is bullshit. If you’re an elite runner, I can see how you don’t have time to deal with a cup / trash can / etc. Most people running the Philadelphia marathon are not elite runners. The average finish time is over four hours. Are you really gonna claim you can’t spare the extra 10 seconds to find a trash can?

Also stop stripping during races. If you absolutely can’t handle wearing the same outfit for your whole run, at least have the decency to shed your layers at a volunteer station where it’s more likely to get cleaned up.

2. Race organizers need to step up their trash management game

I’m not going to lay the blame on the volunteers and staff who have the gargantuan task of trying to clean up a race course after the fact, especially if it’s a marathon course. I do however hold the organizers responsible for allowing the problem to get as bad as it is. I’ve been to races where there are only a few small trash cans immediately near the water station, or no trash cans at all. Water stations should have some sort of trash management solution on both sides of the race course, and there should be some place for runners to throw their trash at least a tenth of a mile out. Staff should be collecting the trash during the race so that the wind doesn’t blow it all over the city.

No matter what some garbage is going to escape. Over ten thousand people run the Philadelphia marathon, and there are probably a dozen or so water / gel stops. You have to plan for the fact that some packaging is going to get out into the world, and that stuff needs to be biodegradable. Then it’s still disgusting and ugly, but at least it’s not going to be floating in the ocean for the next 200 years. Gu packets aren’t even fucking recyclable. 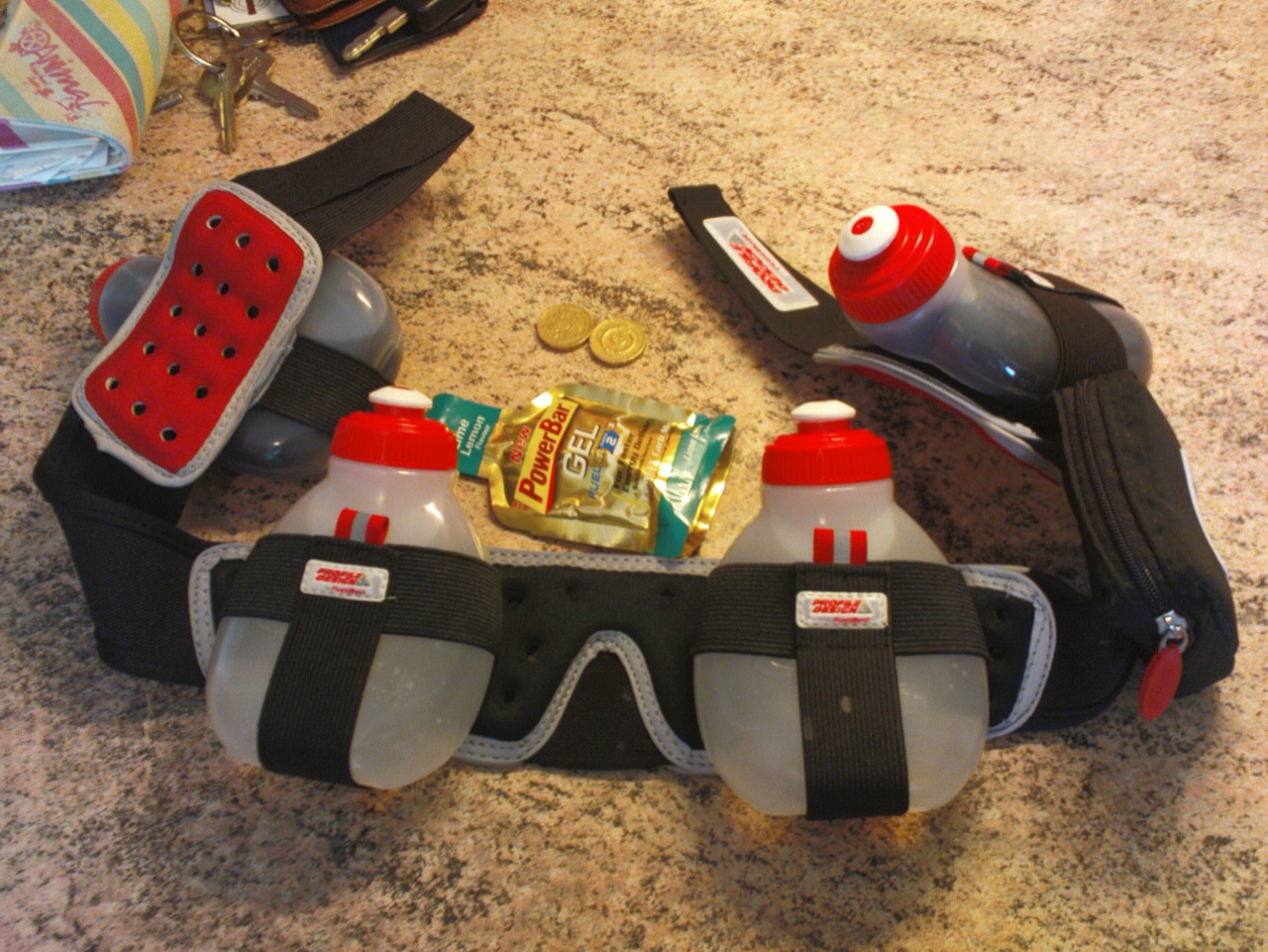 You’re carrying all this shit but you can’t fit an empty foil packet in there?

So yeah, that’s how I’m feeling about the marathon, and running in general, today. On the plus side my garbage-induced rage pushed me to a new personal record: I did a 10:54 pace over 7 miles. My previous best was a 10:59 for 6.2.

4 thoughts on “Runners, Y’all Are Disgusting”