Over the long weekend we capped off the leaky pipes in the kitchen, nailed down the OSB flooring, and finished painting one of the upstairs bedrooms. Now all we need to be able to sleep there is a bed! 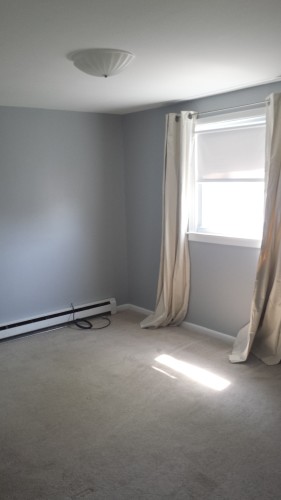 On Sunday Chris and Jen started assembling the cabinets for the kitchen while I tried to make sense of the installation instructions. It’s not easy. There are multiple sets of instructions you have to cross reference and some of them are very vague. While Ikea says “you can install it yourself” it’s clear they don’t think anyone is actually going to.

There are 3 basic components to hanging the cabinets: the rail that mounts on the wall, the cabinet box itself, and then the cabinet feet on the lower cabinets. Each of these is sold/packaged separately.

There’s the general install guide, which gives measurements but is pretty vague about how to hang the rails that go on the wall. Then the rail instructions which make sense until you go to install them, at which point you realize there are a number of steps glossed over (more on that in a sec). This plus the fact that I did not have a hacksaw to cut the rails led me to call it quits in frustration early Sunday afternoon.

Normally you can find an endless number of Ikea assembly / installation tips online. But because the kitchen system, SEKTION, is all new as of February there isn’t much available. The system is nearly identical to the European METOD system, so I was able to watch those videos in order to understand the general process. After a lazy Monday morning I went back to give it another shot.

The first step is to hang the lower rails used to align the cabinets. The general process starts like this:

You have to go from the highest point because that’s the shortest the cabinet legs can be. If your floor is lower elsewhere that’s fine, the legs can be expanded to fit.

Next you have to hang the actual rail using a combination of drywall anchors and screws. I tried to line up as many studs as possible, but due to the spacing of the holes on the rail (which I think is still metric based) I was lucky if I managed to get two. You need to secure the rail every foot. 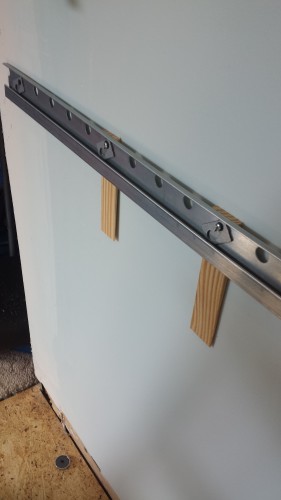 One lower rail, with shims because the wall is not flat

The instructions tell you to shim any spots that are significantly recessed. This was a little more of a logistical challenge than I expected due to the drywall anchors. We ended up doing the following for shims over drywall anchors:

We figured out this strategy through trial and error. One thing that is very different than the old AKURUM line of cabinets is how they mount to the rail. The old ones had a nut like thing that slid into the rail, and then the cabinets lined up with it and were screwed in place. The new ones have a bracket on the back and basically just hang there, with some fasteners to keep them in place. I put one on just to see how it all worked. That cabinet is actually for the island, we haven’t assembled the bottom wall cabinets yet. 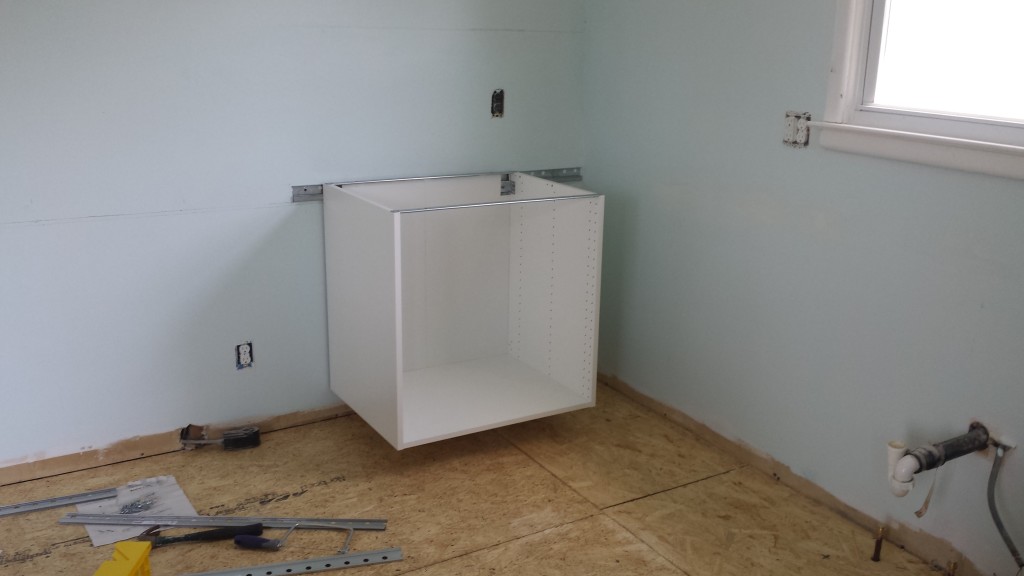 The real life bottom cabinets will have feet

The Ikea instructions tell you to measure / mark out the whole room first, but this doesn’t make sense to me. It’s MUCH MUCH easier to measure for the upper cabinets once you have your lower rails installed and level. I added 1/2″ to my measurements for the upper cabinets because I need a slightly taller backsplash. The backsplash tile we have is 3″ tall, and Ikea’s cabinet spacing is designed for 18.5″ vertically. To avoid having to cut the tile lengthwise I’m adding a little extra space to make room for the grout (which will be 1/8″ spacing between each tile and the counter/cabinets).

We called it a day after getting all the lower rails installed. The upper rails will be a little more annoying, because they’re up high and they’re much longer. We could do it with two people but I think it would be easier with three. 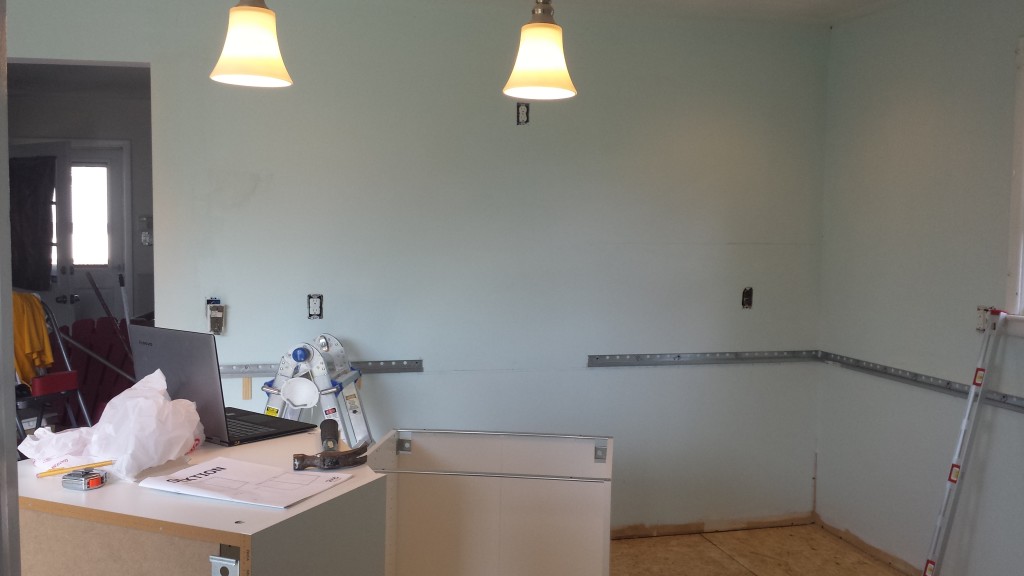 We’re ever so slowly inching towards being able to get the appliances out of the living room!