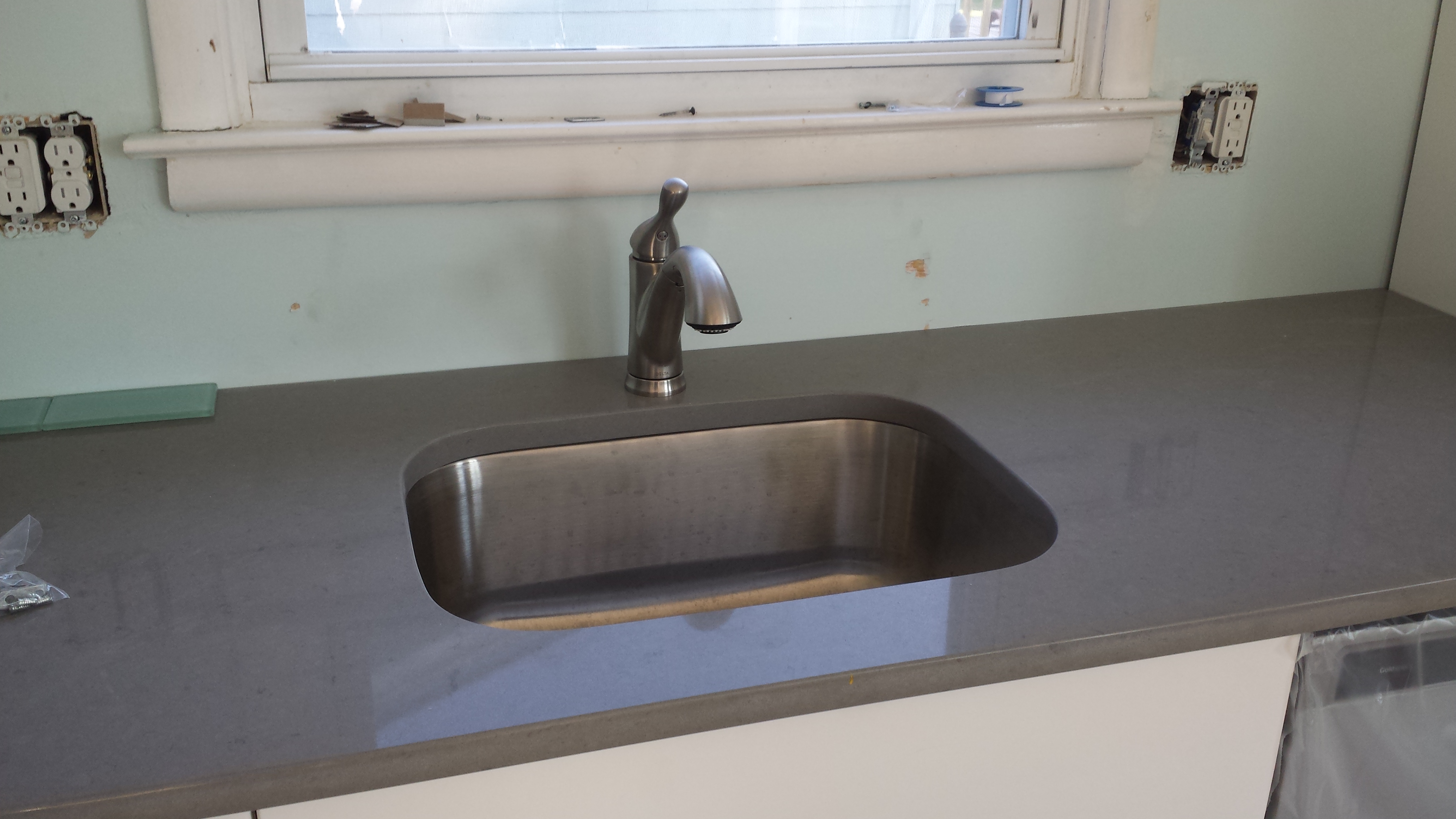 Today I very begrudgingly went down the shore to babysit contractors. To be totally honest I am pretty sick of working on the house right now, and would really like to take a break for a bit. But today was the last big contractor push, so off I went.

The biggest and most exciting thing is WE FINALLY HAVE HOT WATER. YAAAAAAAAY. 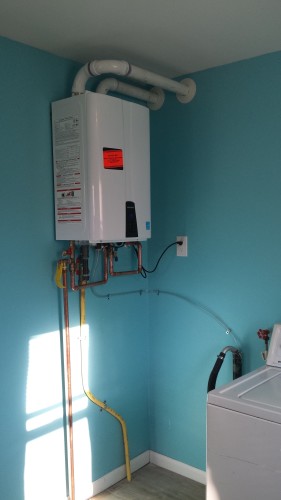 It’s gas powered, tankless, and up and running. I can shower forever!!!!! The tankless is perfect for our use case because we often have many people needing to take showers in a row, and we don’t want to pay to keep a big tank heated when no one is around. But mostly WE HAVE HOT WATER. I CAN TAKE A SHOWER NOW. OH MY GOD SO EXCITING.

The sink was also installed, but not without some headaches. The kitchen design has a pull-out trash drawer under the sink. Unfortunately my $15 sink from the habitat restore is pretty deep, and by the time you add the garbage disposal it’s too deep for the trash drawer to clear. So now I have a couple of problems: I need different, swing-open style doors for the sink cabinet, and I need to figure out where the trash can is going to go.

But whatever! I’ll figure it out later! For now I’m just happy I have hot water running to the sink!

Then the electrician came to fix the upstairs outlets. Despite having some 3 prong outlets none of them were grounded. It turned out the electrical panel wasn’t wired correctly, and fixing that fixed all of the upstairs outlets. Unfortunately it was also discovered that due to the age / decay of the conduit carrying the mains from the street to the house, water was accumulating in a bend just below the electrical panel. This is bad, but not an emergency, so it goes on the list of things to fix when we tackle the siding and windows.

The closer I get to the end of the current to-do list, the more big projects appear for the future. None of them are critical, but all will have to be addressed eventually.

Windows. A number of the windows, including the sliding glass door, are no longer sealed. This means they’re inefficient, and condensation forms between the panes of glass. One also has a busted sash. All of this we knew about when we bought the house.

Siding. Strictly speaking we don’t have to do anything to the siding. But if we’re doing the windows they’ll have to remove a lot of the siding anyway. And the siding is asbestos. So if we’re going to touch it at all, there’s a strong case to be made for removing it. But it’s in good shape for now so as long as we don’t touch it then we’re fine.

Electric Meter Replacement. We need to replace the lines that to from the street to the electric meter, which wrap around the side and back of the house. BUT the city doesn’t allow meters in the back yard anymore, so if we replace the lines we’d have to move the meter to the side of the building. While that’s kind of annoying, with the meter moved forward the mains connection can be run under the crawlspace. This would shield it from the sun and rain, which is what damaged the old one in the first place. This is another one we can ignore for a little bit, but if we replace the siding we’d have to get this done then since they can’t just shove the old crappy line (which is attached to the siding) back into place.

The Joists. We took care of the worst of these, but there are still a few sad joists under the house. Or maybe the house was just poorly engineered in the first place, I’m not sure. Either way the floor in the bathroom bounces way more than it should. We have a good structural guy, but he’s on tour with his band for the summer.

The Bathrooms. Both need new tub/showers. The upstairs one is downright unsafe, and the downstairs one is really gross yellowing plastic with missing enamel (and it’s not worth refinishing). It’s not urgent by any means, but it’ll definitely need to be taken care of eventually. I also strongly suspect the subfloor in the downstairs bathroom is rotted.

Anyway, all this stuff is for later. Way later. Spring at the earliest. The house is now sort of livable (we have beds, a fridge, and hot water) so I’m gonna back off the breakneck pace to restore my sanity some. I really need a weekend that does not involve installing cabinets or flooring.