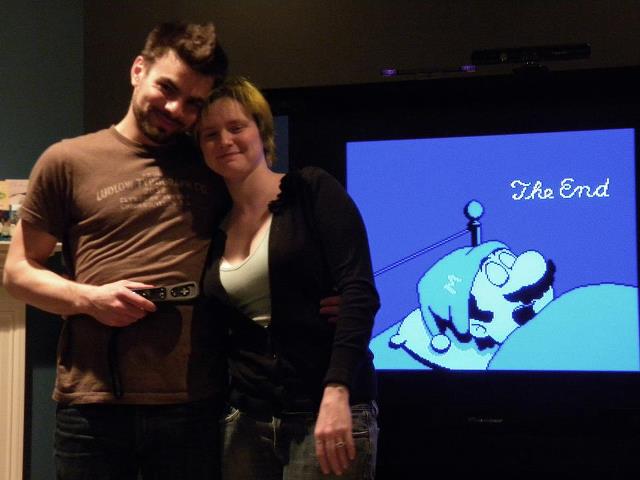 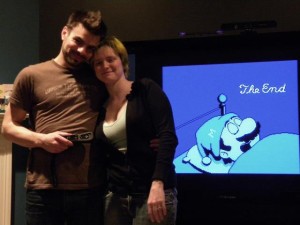 RevolvingDork and I celebrated our two year anniversary, and kept up our quest to play each Super Mario Brothers sidescroller straight through, in order.

This year’s game was Super Mario Brothers 2 (SMB2), which came out for the NES in 1988. We played it on the Wii’s virtual console as we sadly don’t have the original cartridge.

Our rules are pretty simple: we hotseat lives / levels, and if we get a game over we’re allowed to warp back to the world we were on, but no warping past that.

This game is probably one of the most challenging. It is also one of the weirdest Mario games, because it wasn’t actually written as a mario game. It’s actually a reskin of the Japanese game Doki Doki Panic, as the Japanese Mario 21 was deemed too challenging for American audiences.

Aside from the somewhat punishing levels, SMB2 is challenging because 1-ups are few and far between. You get two continues before you are unceremoniously booted to the start screen, losing all your progress. Your only real chance to rack up some lives is to voraciously collect coins2 and then participate in the bonus round slot game at the end of the level. With some practice I was able to consistently get extra lives, but even then our maximum life count was a measly 25.

The other factor that made it a challenge was the layout of the warp zones. You can warp from world 1 to world 4, 3 to 5,  4 to 6, and 5 to 7. So when we died in the last stage of world 3 we had to start all over from the beginning. It took a while, and there was a lot of cursing.

We did finally vanquish the game – on our last life with only one heart remaining. If this was an XBOX game, I would have demanded an Achievement for that.