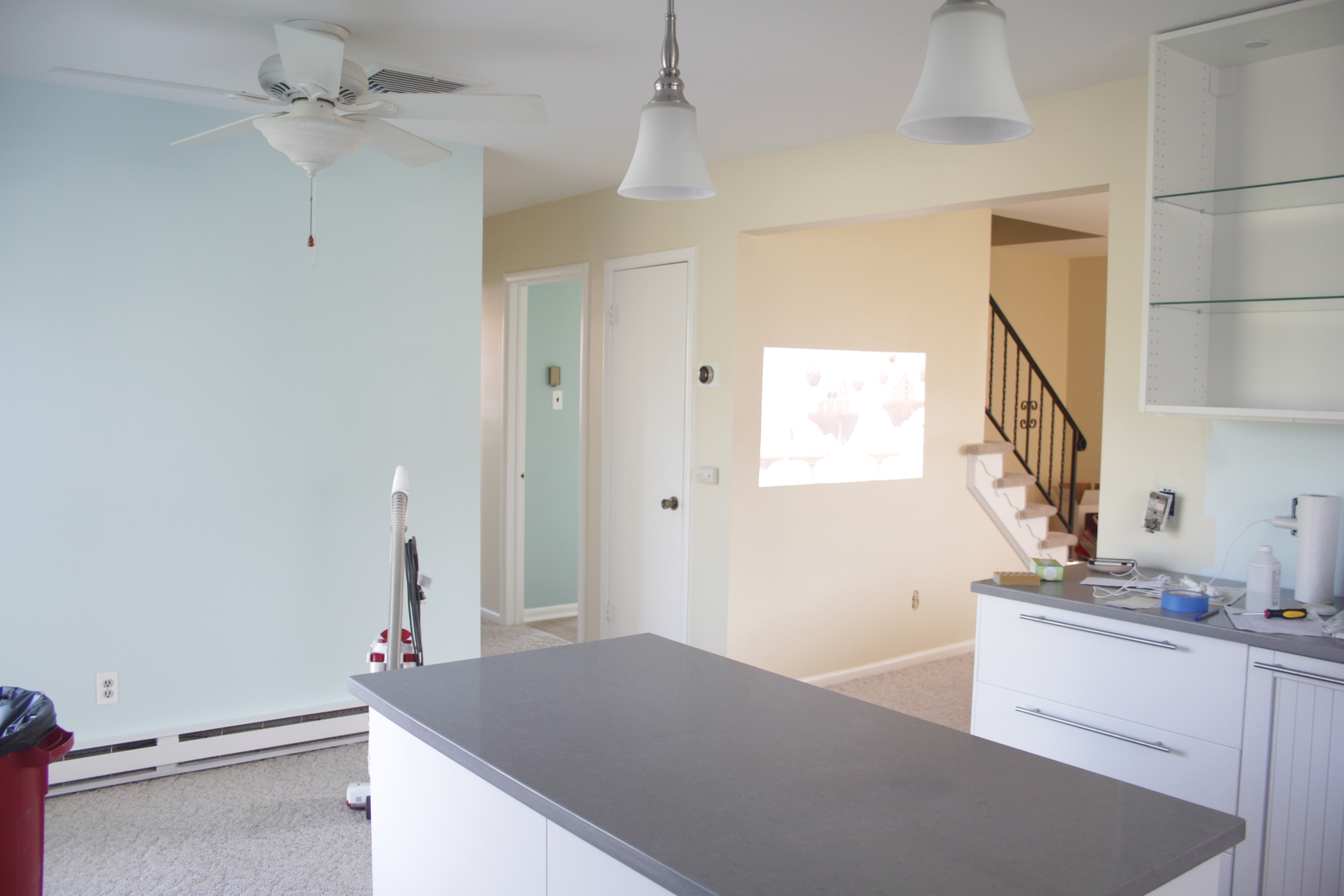 At long last, all the rooms are painted! We painted the upstairs ourselves, but after 4 months of nonstop work I am exhausted (and also 5 months pregnant) so we decided to hire a painter to do the downstairs. But before we could have the walls painted we had to get the new flooring installed in the two downstairs bedrooms.

The bedrooms came to us with some fake parquet stick-on vinyl tiles (which tested asbestos free, thankfully). We replaced it with the same click-lock waterproof vinyl we used in the kitchen and laundry room.

The tiles came up easily but getting the sticky goo leftover was nearly impossible. It dissolves with mineral spirits, but I didn’t really have a mop capable of getting the slick goo up efficiently and wearing a respirator for long periods of time sucks. I ended up scraping it with a putty knife and then putting paper down to just contain the adhesive.

Apparently I did some math wrong when I ordered flooring because I came up short about 6 square feet. The flooring company warehouse is out in Trenton, about an hour from me. My dad saved the day by volunteering to drive to pick it up on Tuesday, my mom and I came down on Wednesday to finish installing it, and since my father-in-law had pre-cut all the quarter round molding we were able to get everything done in time for the painters on Thursday.

The first day the painters prepped all the walls. They were in pretty rough shape. It took two guys a solid 8 hours of working to get everything spackled and smooth.

The painting itself took a crew of 5 or 6 guys ten hours. They managed to sand and put two coats of paint on the ceiling, walls, and trim all in one day. The change is dramatic, the house feels much brighter and more open now (admittedly some of that openness also comes from finally having the house clean).

Kitchen Island, Dining, and some of the living room.

Living Room plus husband and projector

Big bedroom (the colors here are closer to true)

The house is finally starting to look good. Gone are the piles of debris everywhere (except the laundry room and downstairs bathroom). The carpets need a professional cleaning but at least they’ve been vacuumed. There’s a ton of little finishing to do all around the house, but the major stuff is very close to being done. My last big kitchen task is to tile the backsplash.

One slight unrelated aggrevation: the hot water heater has been cutting out periodically. After a phone call to tech support (yes, my water heater has a tech support line) it was determined that the flow rate isn’t high enough for the burner to kick on. The next debugging step is to figure out if the problem with the flow rate sensor, or the plumbing elsewhere in the house. I would not be even a little bit surprised if the problem is the plumbing, the water pressure upstairs seems lower than it should be. Sigh.

Oh well, plumbing can be fixed… and I’m finally approaching the fun part of this whole project… decorating! I’ve logged more hours on Pinterest lately than I’d like to admin. And I might be seriously considering getting a tide clock (but only if I can find a pretty analog one that doesn’t have to be manually set every week).

2 thoughts on “All done with painting and flooring!”