A Week with Blue Apron

Last week I tried out CookSmarts meal planning. This week I’m going more full service with Blue Apron, a meal-in-a-box service that provides ready-to-cook recipes and ingredients. We go the 2-meals-4-servings option, which retails for $69.92. We used a coupon for a free trial week.

Thanks to an aggressive marketing campaign there are literally hundreds of Blue Apron “unboxing” posts and videos, so we can skip past most of that (google it if you’re interested). One thing that did drive me nuts was pulling out items that I already have in my kitchen. Garlic, baby spinach, oranges, honey, red wine vinegar… all those things are already in my fridge/pantry threatening to rot.  The real kicker was the recipe that came with a chipotle pepper in adobo sauce, since I have a TON of those leftover from last week’s meals.

On the flip side I was excited to try out the samosa recipe, because searching the entire city for samosa wrappers would have taken me the better part of a day and probably still failed. Last time I tried to find an Indian grocery store I ended up at a bodega that sold mostly cigarettes (thanks, Google).

I made this recipe on Monday, and things got off to a rocky start. 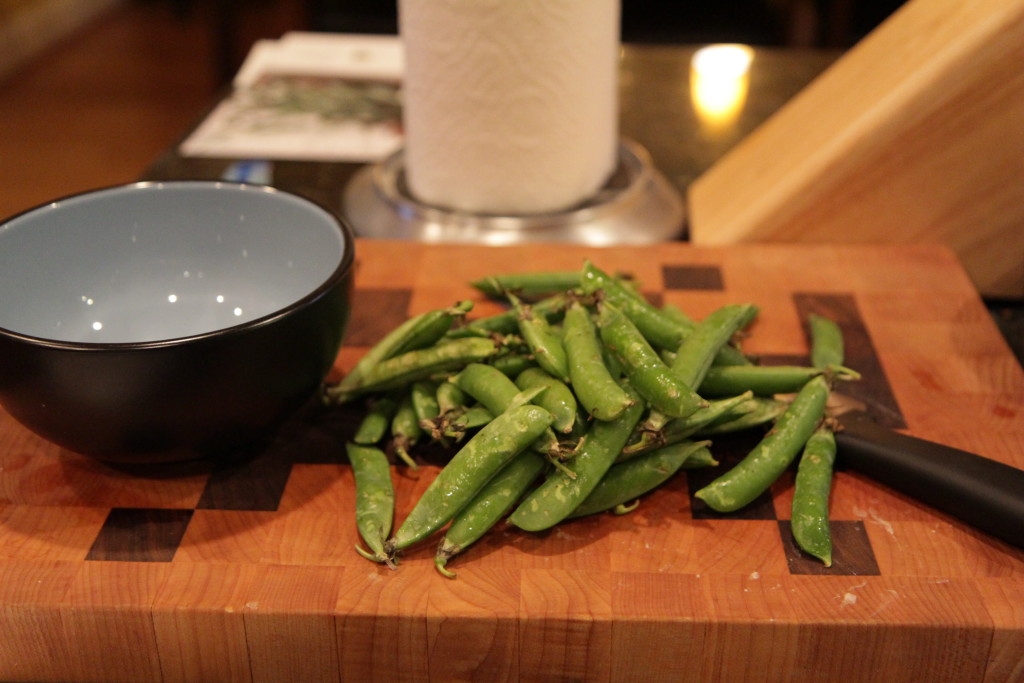 Look, I’m not saying that freshly shelled peas aren’t better than frozen peas, I’m sure they are. So I bristled at the instruction, cursed when peas escaped and went flying across the room, but ultimately ended up with a thing of nice plump peas. I made the chutney, cooked the spinach, prepared the samosa filling, and by this point over an hour had passed. I’d told my 3 year old she could help with the samosas, and she kept very impatiently asking “why is it taking so long?” I also managed to dirty approximately every single bowl and utensil in the kitchen during the prep process.

Every step seemed to take longer than the last, and when the samosas / cauliflower were finally in the oven I thought “why did I make the chutney first? I could have just made it while everything baked.” But then I looked at the giant pile of dishes in the sink and spent the 15 minutes cleaning up instead.

An hour and forty-five minutes after I started we were finally ready to sit down and eat. 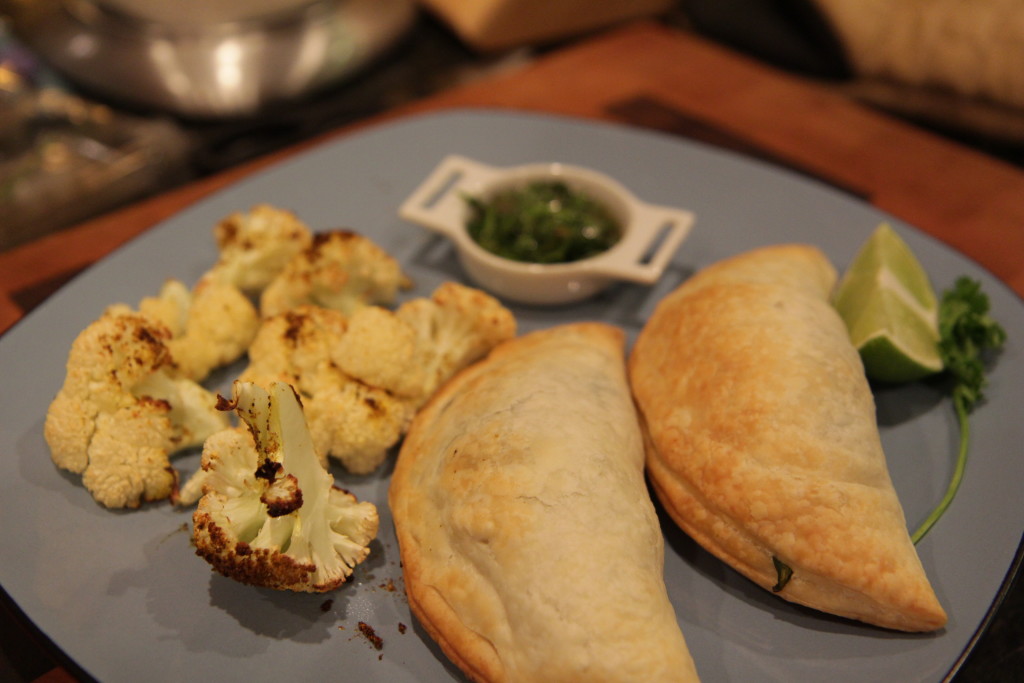 The samosas look pretty good, but were pretty bland. I should have added more salt/pepper.  The chutney was great, the cauliflower was OK. What really bugs me though is how little protein is in this meal. You get a little from the peas, and some more in the cauliflower, but not much. The serving sizes are small and about half and hour after dinner I was raiding the fridge because I was still hungry.

After dinner I was exhausted from nearly two hours of cooking and cleaning. I collapsed into a heap with the baby (who of course was hungry by this point) while Chris did the rest of the dishes.

Thankfully this meal went a lot more smoothly than the first. From start to finish it took one hour and 10 minutes, which includes 10 minutes of downtime while things roasted (used to clean the prep dishes and utensils).

The chicken came out crispy and the orange “salad” paired well with it. The collards were OK.  Our local grocery store doesn’t have much in the way of “fancy” mushrooms so it was nice to try some varieties besides white button.  I’m not sure it’s a recipe I’d make again though. Once again I left the table feeling a little hungry. Mostly I was relieved that cooking Tuesday’s dinner wasn’t another 2 hour marathon. 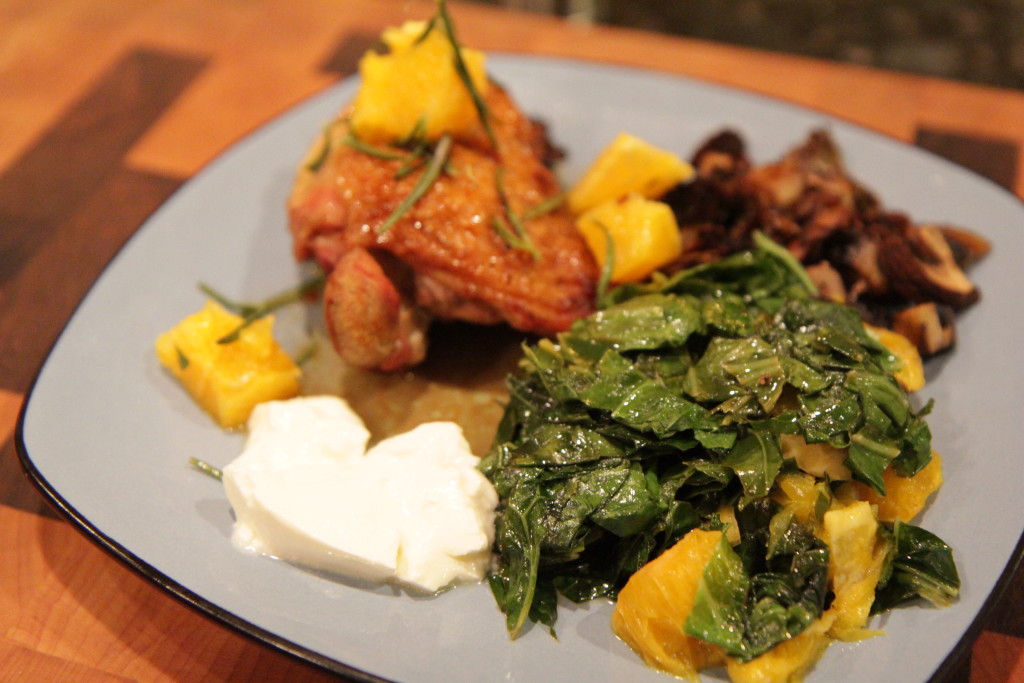 The rest of the week will be filled with leftovers and an ad-hoc meal made by throwing all of last week’s leftover ingredients on some chicken.

For the Blue Apron part of this week we’re at 2 hours 50 minutes and $70 for 2 meals, versus last week’s 5 hours and $60 for 3 meals. I knew Blue Apron would come out more expensive, since most of what they’re selling is convenience, but I didn’t expect the two to come so close in time-per-meal. I also felt like the CookSmarts recipes were much better.

Originally I’d planned to try a bunch of different meal-kit services, but this week was irritating enough that I might just skip the others. I know many people love Blue Apron, friends of mine swear by it, and maybe this was just an off week for them. But based on this week I just don’t think Blue Apron is a good fit for us. I am willing to exchange the convenience of delivered food for more flexibility in my meals. One of the biggest headaches of Blue Apron is the week lead time needed to change or cancel your meals. I don’t always know what I’m doing a week in advance. Mostly though I was just really frustrated with the time-to-deliciousness ratio. It wasn’t any cheaper than ordering takeout, but it was considerably more labor intensive. Not only that but I left both meals feeling hungry.

One thought on “A Week with Blue Apron”