A Week of Meals with CookSmarts

I have been cooking the same 5 or so recipes for literally years now. As a result I am very tired of them. And as a mother to a new baby, I am very tired in general. As such, we’ve been eating a lot of takeout. It’s incredibly delicious, but also starting to seriously get in the way of my efforts to get back into shape. So I’m rededicating myself to cooking on the regular.

This week I tried out CookSmarts, a weekly meal planning service which provides you with up to 4 recipes per week and automatically generates a shopping list based on the number of people you’re cooking for. The service is $8/month, but they offer a free trial (no credit card required, thankfully).

Each week you mark which recipes you’d like to cook. Any dependencies (sauces or sides from one recipe that are reused in another) are noted. I only have time to cook 3 nights a week, so I chose the Maple Dijon Crusted Salmon, Adobo Honey Chicken Kebabs, and Turkey Meatball Lettuce Cups this week.

Each recipe gives you dietary options such as gluten free, paleo, and vegan. Although we eat most anything, I often need to cook gluten-free for friends or family so I chose the gluten-free options.

The grocery list provided by CookSmarts is well organized. Thankfully I had a lot of the stuff needed on hand, apparently I am the type of person who has 5 different varieties of vinegar lying around. I had to go to two different grocery stores for the rest of it. Perhaps “had to” is an exaggeration. A lot of the less common ingredients like almond meal are way more expensive at my local grocery store. Going to Trader Joe’s on a Monday afternoon was a somewhat harrowing experience, but I survived. There was a whole incident wherein I thought I needed ghee, but Trader Joe’s was out, but then I realized I didn’t really need it (that was for the Paleo version of the recipe), and then I was lazy-shamed by my friends for not making my own ghee. In the end my mom got me some ghee from a different Trader Joe’s. Cool story, I know.

My grocery bill for these 3 meals was $57.25, excluding the stuff I already had, and it took me 2 hours and 15 minutes to gather everything. The most expensive item on the list was the salmon, and my costs were a little lower than they might have been because I had a bunch of ground turkey in the freezer already.

I made this meal first because fish smells kinda weird to me even when it’s fresh, and I didn’t want it hanging around my fridge any longer than necessary. The recipe includes videos with tips on preparing food, and I learned that you are supposed to wash and dry fish before cooking. Now I know. Sorry, anyone who’s ever had salmon at my house in the past.

The salmon was pretty easy, and gets slathered with a tasty mixture of honey, dijon mustard, and almond meal (or breadcrumbs if you’re glutenous, which is different than gluttonous). It was paired with a baby spinach / apple / mandarin / pecan salad. Please note that it is not possible to buy mandarin oranges in quantities of less than 1,000, and everyone in my house will be enjoying tiny oranges for the rest of the month.

Also my husband is not that into salad (though he will eat it if I serve it because he’s not an asshole). So I packed up half the salad into a jar (yeah, Pinterest!) for lunch. What I did not realize at the time was that salad was about to become a major theme in my life. 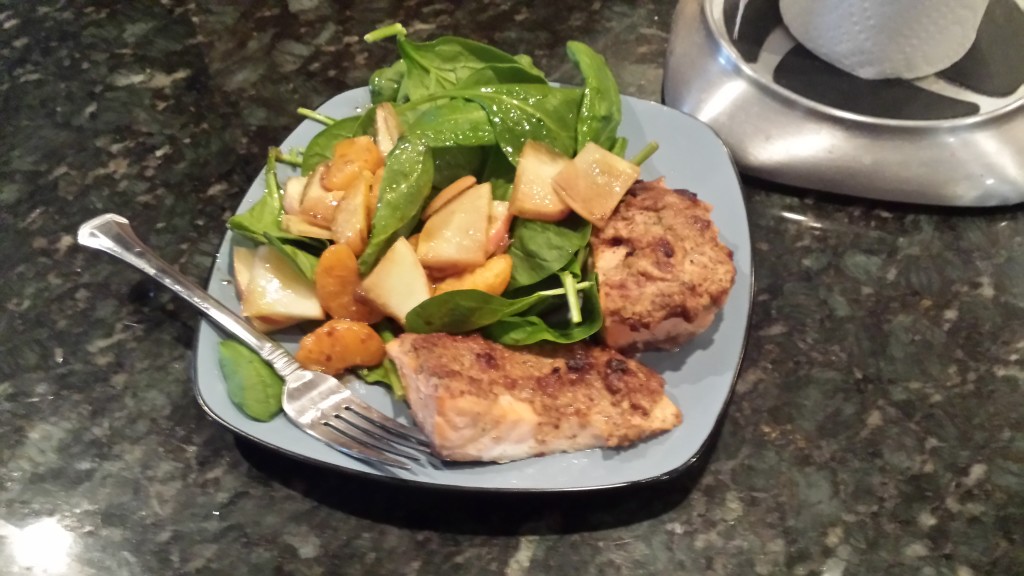 The whole meal was delicious. A+ would eat again. It took me about 45 minutes to prep and cook, start to finish. 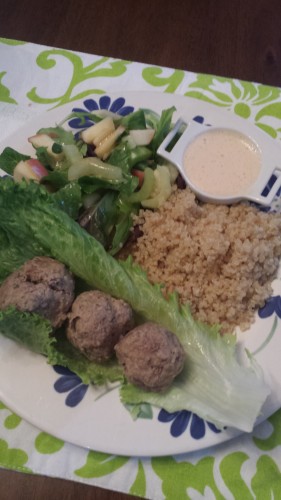 Turkey meatballs with quinoa and salad

This meal I made for six people, and took over to my sister-in-law’s so I could earn brownie points while drinking her wine. I cooked the quinoa in the rice cooker, made the meatballs in the morning, and then made the salad while the meatballs were cooking. I greatly overestimated how much salad would be consumed, and thus will be eating leftover salad for the rest of the week.

The big time suck with this recipe was the adobo sauce (seen in the little dish on the left). It’s used for both this recipe and the chicken kebabs, and they suggest you make it the weekend before. Since I didn’t go grocery shopping until Monday I got to make it Tuesday afternoon. It’s one of those irritating things where you only need a few teaspoons of adobo, but you can only buy it in a 8 oz can with some chipotle peppers. So after making the sauce I had spend time packaging the leftover peppers into ice cube trays for freezing / later use. Which is to say I’ll probably throw them out in 6 months when I’ve completely forgotten about them.

All the recipes have you make salad dressing from scratch, which is great and easy, but I’ll probably skip it next time. I have approximately 20 bottles of store bought salad dressing already. They go well with my 5 kinds of vinegar.

The sauce and the meatballs were delicious, my 3 year old even ate the salad (or at least she was willing to pick out and eat the apples / celery), and I got some great sister-in-law points from it. I spent a total of 1 and a half hours cooking on Tuesday, not counting the time it took to pack everything up to travel. 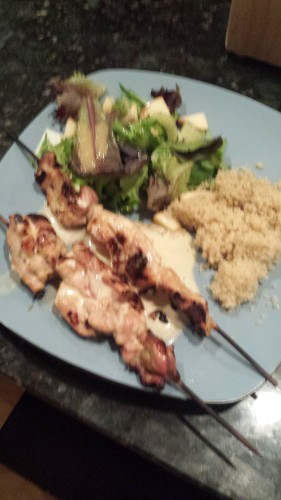 I swear next time I cook something I’ll get out an actual camera.

This meal was really easy and straightforward, mostly because I’d already made the quinoa and adobo sauce on Tuesday. It took 10 minutes in the morning to start the marinade. Grilling the chicken was quick, once Chris spent 2 hours cleaning the grill from its winter sadness. Rather than make a new salad I just ate some of the salad leftover from Meal 2.

Total time, including the morning marinating, was 30 minutes.

Sixty bucks and 5 hours is not terrible for 3 meals / 14 servings. I’m sure over time I’ll get a lot faster at grocery shopping (Chris usually does it), and not all weeks will require a trip to the minor circle of hell that is Trader Joe’s in the suburbs. It’s still a pretty significant time commitment. Out of curiosity I priced out what the same or similar ingredients would have cost on AmazonFresh. It came to $69.43, or $12.18 more (not including the $300 annual Amazon Prime Fresh membership). FreshDirect would have been around $78.

One of the advertised benefits of box-of-food services like Blue Apron or Plated is that there’s no unused food to go bad, and I can see the appeal. Dry goods like almond meal or shelf stable ingredients like maple syrup are no big deal leftover. But I’ve got a bunch of green onions, half a head of lettuce, half-bags of both baby spinach and spring mix, a giant pile of mandarin oranges, and some celery all waiting to rot if I don’t think of something to do with them soon.

Overall though I’m really happy with the meal plan, and signed up for the paid version (which unlocks the entire archives as well as new plans each week). Next week I’m giving Blue Apron a try, and I’m interested to see how it stacks up in terms of time, cost, and taste.