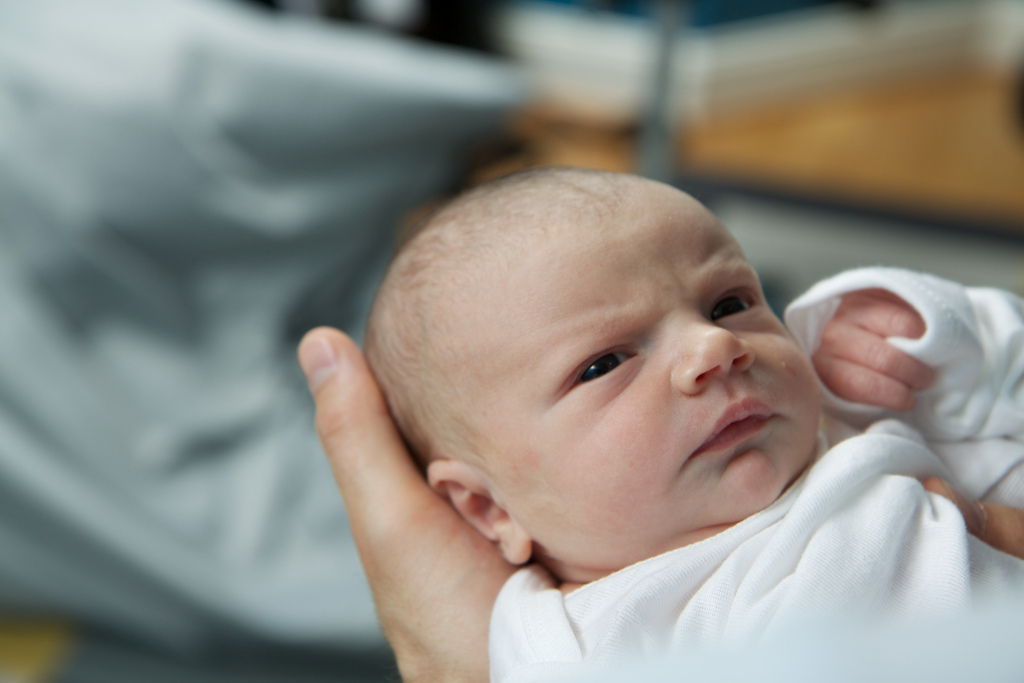 If I could use only one word to describe becoming a parent, it would be “disarming.” I am someone who, until this week, possessed no maternal instinct and quite frankly does not find babies to be cute. And yet one look at my wrinkly little blob of a daughter drains me of all my jaded, snarky comebacks.

Our little Bitmap (a nickname which I only barely convinced RevolvingDork not to use as her middle name) is settling into her first week. RD and I are overwhelmed, but thrilled.

We delivered in a hospital downtown under the care of a large midwifery practice. We hired a doula, a support person who helps both the mother and father stay calm during what is likely to be an intense experience. Bitmap’s entry into the world wasn’t all what we expected, but we knew that we’d get a curve ball no matter what we planned for. This is her birth story.

24 hours after my water broke I still wasn’t in labor. We went to the hospital, and decided the best option would be to induce. Induction was pretty much last on the list of things I wanted, I think I feared it even more than a c-section, but with absolutely no labor signs it seemed like the best option. I was admitted and given an IV of pitocin.

The plan was to labor without pain medication, and only get an epidural if I really felt I needed it. Early labor was tough, but my husband was amazing. The doula suggested different positions for managing the pain. I was free to get out of bed, so we moved all around the room with each contraction. The peak of them sucked, but I could rest between them. Pitocin often makes contractions much more painful than unmedicated labor, and because my water had been broken for so long I was on a pretty aggressive schedule. By 4 hours in the pitocin was cranked up to 14mu/min, and I could no longer rest at all between contractions. I started feeling delirious from pain and exhaustion, but wasn’t anywhere near fully dilated so I got an epidural. The anesthesiologist was great and within minutes of him placing the line I was feeling lucid again. I could still feel every contraction (and had to breathe through some of the bigger ones), but I no longer felt like I was going insane.

As the contractions got more intense, the baby wasn’t handling them well and I was put on oxygen. It actually helped that I had to breathe through the contractions, because inhaling the oxygen deeply kept the baby’s heart rate rock solid.

For one reason or another, my temperature started spiking and because my fluid had been ruptured for so long they had to assume it could be due to infection. I was started on antibiotics and given a fever reducer. An infection in the mother during labor is likely to affect the baby as well, so the baby would need to be given a course of antibiotics immediately after delivery. This was a pretty huge bummer, because it meant that the baby would have to go to the NICU for observation rather than come up to room with us.

As that information sunk in, I started to lose it. I was having the exact experience I dreaded – strapped to a bed covered in tubes getting every medical intervention on the planet. I started feeling like we were circling towards inevitable c-section, and really started fearing for the health of our baby. It seemed like every time the nurse came in, something new was going wrong. High temperature, high blood pressure, baby wasn’t handling contractions well again. There was a shift change and the new midwife wasn’t very communicative, which left me feeling frustrated and scared. Thankfully our nurse was AMAZING and was on top of everything, and did a really good job of explaining the things the midwife didn’t bother to. She and our doula managed to get me to a point of feeling at least OK, if not great.

After that low, things started turning around. My temperature dropped, and we found a position where the baby tolerated the contractions just fine. They even managed to get me into a sit-squat position where gravity could bring the baby down, which I thought was pretty impressive given the epidural. I got to 10 cm, and they said I could start pushing whenever I felt the urge, but I had this really intense back pain and I wanted to rest a bit before the Big Push, which I figured might take a while.

Unfortunately the back pain just got worse and worse, no matter what. It was strong enough that I had to use a lot of natural labor techniques during contractions, and my husband’s poor arms were shaking with exhaustion from doing so much counter pressure. I was mashing the button to increase the epidural (which was of course on a timer). After about an hour which was not at all restful, they suggested I just try pushing.

The second I started pushing, the back pain was GONE. It wasn’t muscle fatigue, it was the baby pressing on down on her way out the door. Pushing felt GREAT, which is to say it was still really hard work, but oh my god not having that back pain was AMAZING. They told me the baby was almost out, and I didn’t believe them. I started grinning like a madman and said all sorts of stupid things like “I’m having a baby!” over and over. In four contractions she was born. She was 6 pounds, 14 oz and 21.25 inches long.

I got to spend a little time with her before she was whisked away to the NICU. Once I was cleaned up we went to visit her – compared to the rest of the NICU babies she was gigantic. She was covered in monitor leads and had an IV in her right arm, but her vital signs were good and she was sleeping peacefully.

Thanks to an amazing husband, doula, and the hospital nursing staff, I was able to have a really positive experience despite despite nothing going to plan. It was really hard, emotionally moreso than physically, but I feel like every decision we made was the right one. I wouldn’t change a single thing about it, and I’d definitely be willing to do it again. In a few years.