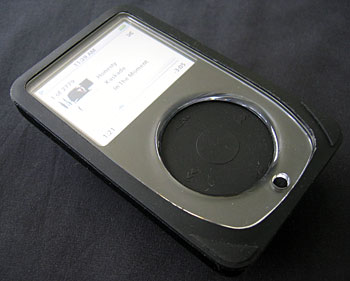 Since I viagra online in spain moved to New Jersey and stopped biking to, or even going to, an office, I haven’t used my iPod much. For the last year it has languished in a drawer as newer and fancier generations of iPod are released.

My iPod’s reluctance to awake from its slumber is by no means surprising. And this iPod has not led a particularly cushy life. On an alarmingly regular basis my iPod would fall out of my pocket during my bike ride to work. When it did it would either hang precariously from the headphone jack or, more likely, tumble down the street. 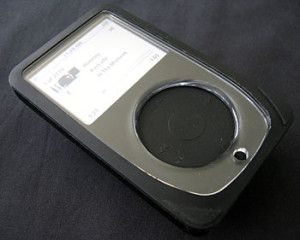 While the industrial strength case I got (shown left) is the sole reason the thing functions at all, my iPod cries of protest want me to know it’s time for a new one. The battery lasts about a third of what it used to and every now and then the whole thing just freezes with a big black bar across the bottom. Not even a sad mac face, just an angry black bar. This is undoubtedly related to the repeated head trauma the little device has faced. The classic iPods have hard drives in them (as opposed to flash) and really don’t appreciate being shaken or dropped.

So now my quandry is whether to stick it out until the thing finally dies, and get the latest and greatest now, or to give into my technophile tendencies and put it out of its misery. While the lack of battery life would be enough for many to give up on a device, I’m frankly not away from a power source for very long stretches of time. Even at the gym there are iPod chargers on every cardio machine.

The sudden freezing can be distressing, although it fixes itself when I re-sync with iTunes. I’ve been listening to a lot of books on tape lately, and having the iPod cut out at a climactic point in the story leaves me furiously stabbing at its little buttons in an attempt to revive the thing and find out what happens.

Looking at a timeline of Apple media devices on wikipedia, the current generation (6) has been around for about as long as mine (5th gen) was allowed to live, which means it’s due for an update. I have an amazing knack for buying Apple devices right before they up the specs. So I suppose the prudent thing would be to wait until the next one comes along and my iPod is really and truly dead, not just begging to be put out to pasture.

While I’m mostly considering another iPod classic, the Nano does have the advantage of being smaller and supports the Nike+ features at my gym. If you have a snazzy enough iPod it will log your workout onto it and then upload it to a tracking website when you do your next iTunes sync. Or so I’ve been told. My iPod is not nearly snazzy enough. But even the 16GB Nano is smaller than my music collection, not to mention video, so it’s less than ideal. And I’m not interested in the iPod Touch, I already have one infuriating touchscreen device rattling around in my purse: the G1.

I keep reminding myself that today’s shiny new iPod will be next year’s whiny old curmudgeon, and as such I think I’ll wait it out a bit longer.

1 thought on “The Death Cry of an iPod”