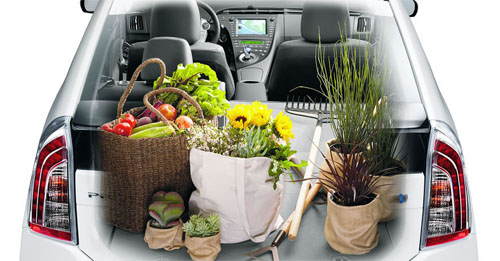 We knew it was only a matter of time before we would need a car. Sure, there’s a zipcar lot near our place, but as my baby bump gets bigger I realize that installing/removing a car seat from a car on a regular basis would pretty much suck.   After procrastinating as long as possible, we broke down and started looking at cars for real.

The new vs preowned and buy vs lease discussions are covered extensively elsewhere, so I’ll cut to the chase: after crunching numbers we determined that buying a car new would be the best option for us.

I like small cars. However, we ferry large objects on a regular basis, and no one makes a Tardis yet, so we focused our search on hatchbacks.  To start, we armed ourselves with a Consumer Reports car buying guide and a handful of relevant articles from Car and Driver.

Our priorities included size (we live in the city, smaller is better), fuel economy, cargo / backseat space, and enough of an engine to safely get us up the incredibly short highway on-ramp  near our house. Neither of us commutes via car, so a lot of the creature comforts that commuters crave are lost on us.

The models on our list included the Toyota Prius, Toyota Yaris, Scion xD, Hyundai Accent, and Honda Fit. We also contemplated some other manufacturers, but there’s only so many cars you can test drive before you start going insane.

We shopped for cars over two days, about a week apart. Test driving cars takes about 3 times longer than it seems like it ought to. Compared to my husband, I’m a little more critical of how a car drives (particularly acceleration and handling), so RevolvingDork drove on day 1 as a coarse filter, and then the cars that passed his liking got scrutinized by me on day 2. Heading into test drives, the Prius was our top pick.

The Yaris is cute! The Yaris is peppy! The Yaris is tiny. It didn’t take long to realize that the Yaris was just too small for us. If it was just the two of us it would be adorable. But with a kid on the way it didn’t seem like it could possibly fit the gargantuan car seats children apparently require, let alone the mountains of accessories everyone says we will soon carry with us everywhere.

Verdict: We took it for a quick spin, said “meh,” and moved on to the next one.

With gas prices around $4, hybrid cars look pretty attractive. A friend of ours has an older Prius and it’s served him well. There are a few different models of Prius, including the new Prius C (which has a body very close to the Yaris). We looked at the Prius “Two.”

The Prius is the most expensive of the cars we looked at by a long shot, but it’s a small price to pay for earth-saving street cred, right? I’ll keep the comments about the earth-hostile battery packs to myself. Unfortunately, the newer Prius’s incredible fuel economy seems to come at the expense of acceleration. The car didn’t feel like it drove as well as our friend’s older one. RD was unimpressed when we took it on the highway, and compared to the other Toyotas I thought the interior looked cheesy. You have to go up to the Three to get something nice looking, which I might not mind except the car starts a good $5,000 more expensive than the others.

Verdict: “The lack of acceleration on this car would drive you nuts unless you put it into ‘power mode’ every time you merged on to the highway,” said RD. Out.

First off, every time I see the xD I think it’s a laughing emoticon. It makes it impossible to take the car seriously.

We liked this car a lot more than we thought we would, but the engine still felt underpowered (which we realize is a theme with small cars), and RD wasn’t into the overall feel. It does have a nice tall cargo area, but the back seat felt a little shorter on  leg room than some of the other cars we looked at.

The taller height makes it feel kind of SUV-ish, but it still handles well and gets good gas mileage. Unfortunately for the xD, both my husband and I actually dislike being higher off the ground.

Verdict: Not a bad car by any means, but nothing to get excited about

I came into the test drive prejudiced against the Accent; we’d just rented a 2011 Accent the previous weekend and it was one of the most pathetic cars I’ve ever had the misfortune of driving. Part of this was because it didn’t have power locks, but in terms of handling and drive it really was a miserable little beast. Thankfully, the Accent has been completely redesigned for 2012. It looks almost sexy! For a compact hatchback, that is.

The Accent has an impressive amount of cargo space and rear leg room for such a tiny car. The engine is still under powered, but it felt punchier than the Scion, Prius, and Yaris. Hyundai has really improved their dashboards, it feels like a much classier car than previous model years. At 30 MPG city / 40 highway, the fuel economy is excellent.

Verdict: Oh hey, we actually like this car a lot!

Wait, Elantra? That’s not a hatchback! No, but since everyone and their mom has been talking about how awesome the new Elantra is, we decided to test drive it anyway.

It sure is nice driving a car with a real engine. Don’t get me wrong, the smaller cars are totally adequate for the type of driving we generally do, but you can really tell that the Elantra’s engine is better matched for the size. The sedan-shape was kind of a bummer (though there are rumors of an Elantra hatchback this summer), but the trunk is pretty cavernous.

Verdict: At the end of day 1, it looked like we were going to have to stage a death match between the Elantra and Accent. Which would win, the nicer drive on the Elantra, or adorably festive and considerably cheaper Accent hatchback?

After the first day’s 5 car marathon, I didn’t really feel like looking at the Fit when we came back on Day 2. But in the interest of due diligence, and because the Honda dealership was all of 200 feet from the Hyundai dealership where I assumed we’d make our final purchase, we stopped in.

Holy cargo space batman! Though the exterior dimensions aren’t much different that the Accent, the cargo space is huge thanks to some Transformers-like contortions of both the rear and front passenger seats. In addition to folding down, the rear seats can fold up into “tall mode” which would be handy for transporting tall things that need to stay vertical, like ficus trees (?).

The drive was on par with the 2012 Accent. It wasn’t super exciting, but not bad and certainly better than the 2011 Accent we rented (the 2011 Accent is my new benchmark for suck). Visibility felt considerably better on the Fit than on the Accent, which is important when you live on a  busy city street. The dashboard was uninspiring, but still not as blah as the Prius. At 27 city/33 highway, fuel economy was the worst of the ones we looked at (though still decent).

Verdict: Just think of all the oddly shaped things we can transport in this car!

The Fit and Accent were both close to what we were looking for, but for us the visibility and cargo space pushed the Fit ever so slightly ahead. With the Accent out of the arena we came to the final battle: the Honda Fit’s cavernous maw of holding versus the Hyundai Elantra, which has an actual engine instead of a wind-up toy. The Fit felt more utilitarian, the Elantra felt classier and more fun to drive.

Priced with the options we cared about, the Fit came in considerably cheaper than the Elantra. Additionally, Hondas retain their value slightly better than Hyundais, so if we need to trade in for a minivan when our kid is president of the Mathletes it may be a better option. After some hemming and hawing over the numbers, we decided to go with the Fit. What it lacks in sex appeal it makes up for in practicality, and that’s why we’re getting a car in the first place: to haul stuff around.

2 thoughts on “Shopping for a small family car”