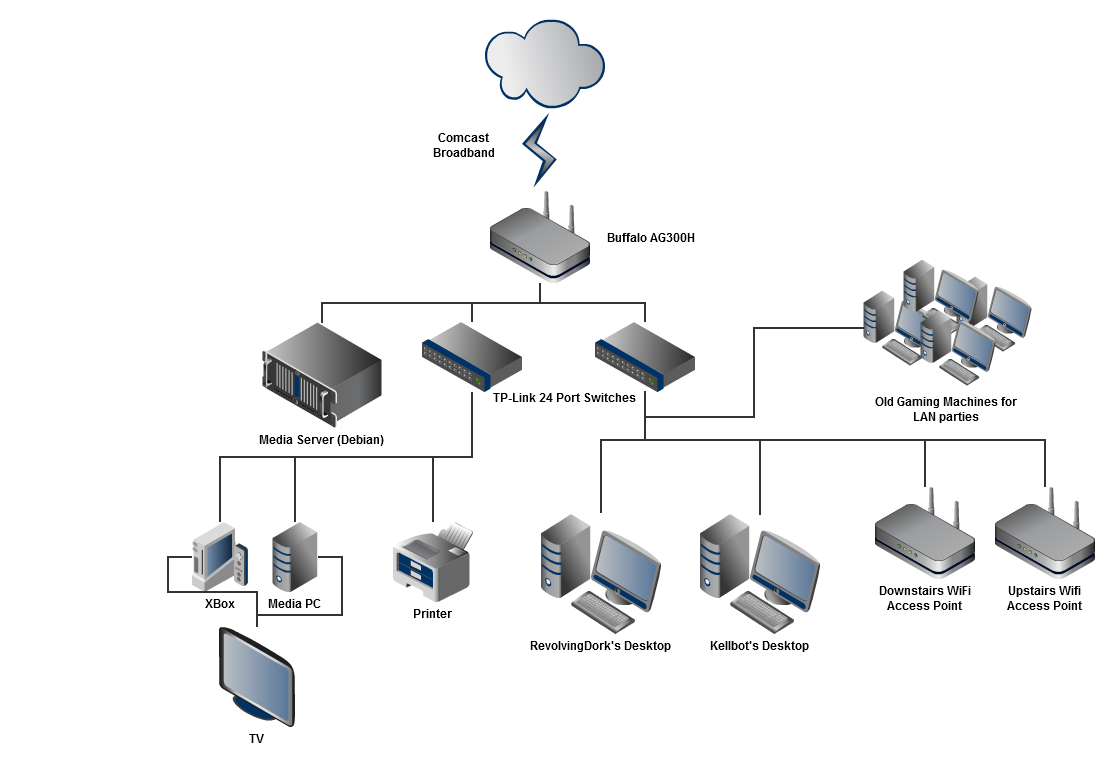 This past week my dad came up from Virginia to help us install high speed ethernet lines throughout the whole house. Not only will this make it easy to set up multiple wireless access points for better coverage, it will also provide a high speed backbone for data throughout the house. In addition to bringing the internet connection to each room, the wired local network (LAN) will allow us to stream high quality video and audio throughout the house.

Why hard wire for ethernet?

Setting up a wired LAN in your house is somewhat unusual, because most people do just fine with a wireless connection. But it does offer some distinct advantages over an exclusively wireless network:

We wired our house for gigabit ethernet (1000Base-T) which has a maximum speed of 1000 Mbit/sec –  about  20 times faster than what most people will get on a wireless network (54 Mbit/sec). This won’t do anything for your internet speeds, which are limited by your ISP (Comcast, Verizon, etc) at rates generally much slower than even a wireless network, but it will allow fast data transfer within the house which is useful for  shared file servers and streaming media to other devices in the house.

Latency is a measure of how long it takes for a packet of data to reach its destination. It’s different than bandwidth and matters more for live communication (online games, chat) than for downloads. Wired networks have considerably lower latency than wireless networks.

Wifi signals are radio waves, which are subject to degradation for a number of reasons. Poorly shielded devices, such as microwaves and cordless phones, often cause interference with wifi connections. Other wifi networks in the area are also a source of interference, and in dense residential areas finding an available channel can be difficult. Even the layout / construction of your house plays a role in how radio waves travel.

Free up the wifi network for wifi-only devices

Wifi routers, particularly the inexpensive home models, tend to get saturated when there are too many devices connected. By taking our desktops and set top boxes off the wireless network there will be more wireless bandwidth for devices that can’t use a wired connection.

Why not wire for ethernet?

If a hard wired LAN is so awesome, why doesn’t everyone have one?

Even if you do everything yourself the cost of wire, jacks, patch panels, and faceplates adds up (~$5 per jack + $100 per thousand feet of cable). You’ll also need a few special tools to terminate and test the wires, which can be an expensive investment for a one-time project. Then there’s also the issue of what’s managing the whole network. At the minimum you’ll need a network switch ($20 – $150 depending on size) and router (a home wifi router will do just fine). And few nerds can content themselves with just the minimum – we opted for a half-sized server rack full of various components.

No matter what shape your house is in, adding a LAN to an existing home will involve punching some holes in the wall. Depending on how your house was constructed, running wire can range from a mild hassle to a total nightmare. Some homes may be laid out in a way that makes running wires inside the walls impossible. If you’re not too concerned about looks and have a smaller home, you can run wires along the baseboards (they’re very low voltage so getting shocked isn’t an issue), but likely you’ll still need a few holes to get them all over to a central location.

My parents have an unfinished basement and reasonably accessible attic space, so running wires through their home was fairly simple. Our house has insulation inside even the interior walls, and no attic to speak of, making running wires a huge hassle that involved punching many holes in the drywall and fishing the wire out with a long cable.

Unlike a wireless connection, your wired ethernet is stuck where you put it. If you decide later you’d like your computer to be on the other side of the room, you’ve got to run a long cable across. For this reason we’ll have both wired and wireless networks in the house. Multiple wifi access points plugged into the wired network will ensure the whole house has good wifi coverage. If wiring a house for ethernet is unusual, our network setup is downright excessive. But if you’re going to put the time and energy into wiring, you might as well go all the way, right?

Our internet comes into the house courtesy of Comcast and is managed by a mid-range  Buffalo consumer router. Originally we had planned to run a dedicated Smoothwall server, but our collection of old dead computer hardware was a little more old and dead than we were hoping. The Buffalo router runs an Open Source firmware called DD-WRT, which lets us do some advanced network management.  Two 24 port network switches are plugged into the router.

There are 34 network drops (individual lines) running from various rooms in the house down to a closet in the basement. These are terminated into one of two patch panels – long strips of RJ-45 jacks you can plug ethernet cords (patch cables) into. A patch cord runs from each jack in the patch panels into the network switches.

Throughout the house there are wall plates with jacks connected to the wires running into the basement. Each of our computers, printers, and video game consoles will be plugged into a wall jack. There will also be two wifi access points plugged in, one upstairs and one downstairs. The router we chose is a wifi access point as well, but due to its location (a closet in the basement) its signal likely won’t get very far.

Also in the basement closet is a Debian server which holds all our movies, music, and shared files. Each PC in the house has a program called XBMC which can stream audio and video from the Debian server. I’m debating throwing a TV tuner card into the server so it can act as a DVR and record television programs as well. If we ever decide to do smart home stuff (computer controlled lights, etc) we could run those off this machine too, though for now we’ve got quite enough going on.

Each component in our network – the cable, patch panel, jacks, switches, and even the network cards in the servers – is rated for gigabit ethernet speeds. This is important to note because gigabit ethernet is new enough that only about 1/4 of the available consumer hardware supports it. In most cases the gigabit version of a component is only a few dollars more than the 10/100Base-T version, and it’s all backwards compatible, but it’s an important thing to note when setting up your network. 1000Base-T is much faster than we need right now, but 20 years ago 10Base-T was considered superfluously fast and now it’s considered pathetically slow.

Our network is, if nothing else, over engineered. I stopped myself short of building the server with hardware RAID and went for two unmanaged switches instead of one giant managed switch. We’ve definitely run more network cable than we’ll use at any given time, but since installing the cable involves tearing up the walls I wanted to do it all before we move in and before the painters come. And maybe we don’t strictly need it, but the half-rack of server hardware in the basement sure looks sexy.

This is part 1 of 3 posts about our home network.
Part 2: Wiring the House for Cat 6 Ethernet
Part 3: Coming soon

13 thoughts on “Our Overkill Home Network”