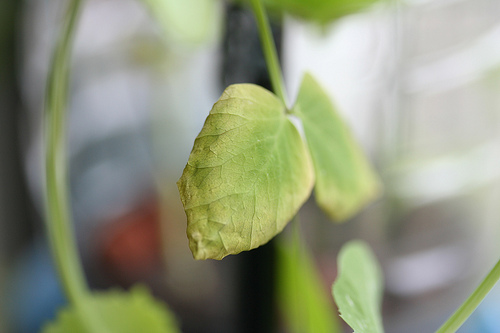 Things are generally going well for my windowfarm. The herbs are starting to look like real plants, and the dwarf sugar peas are going nuts taking over the window. Unfortuantely, one plant isn’t doing so well and I haven’t yet figured out why.

The lower leaves have turned yellow and withered. At first I thought it was simply because they were stuck under the felt and not getting enough light, but now the outer edges of some of the other leaves are joining them.

Cursory research suggests that the plant may not be getting enough water, but if that were the case I would expect other plants in the system to have problems too since they’re all on the same watering schedule. The roots of the sick plant look healthy and have access to plenty of oxygen.

I did notice some suspicious build-up on the clay pellets near the sick plant. It’s possible that some sort of bacterial or fungal infection has managed to get a hold of the plant. If I can find a local source for food-grade hydrogen peroxide I may try flushing the system with a dilute solution of it. In retrospect, I should have sterilized my seeds before placing them in the root plugs for germination. Sterilizing the root plugs in the pressure cooker would have been smart as well.

I’m also trying to decide if it makes more sense to simply remove the troubled pot from the system to prevent the others from becoming contaminated. To do so would mean losing those two plants but I’d rather lose two than the whole column.