I Had a Baby

Like hundreds of millions of women before me, I have successfully birthed a child! It’s one of those things that is, by definition, so incredibly mundane. But so incredibly insane to experience! 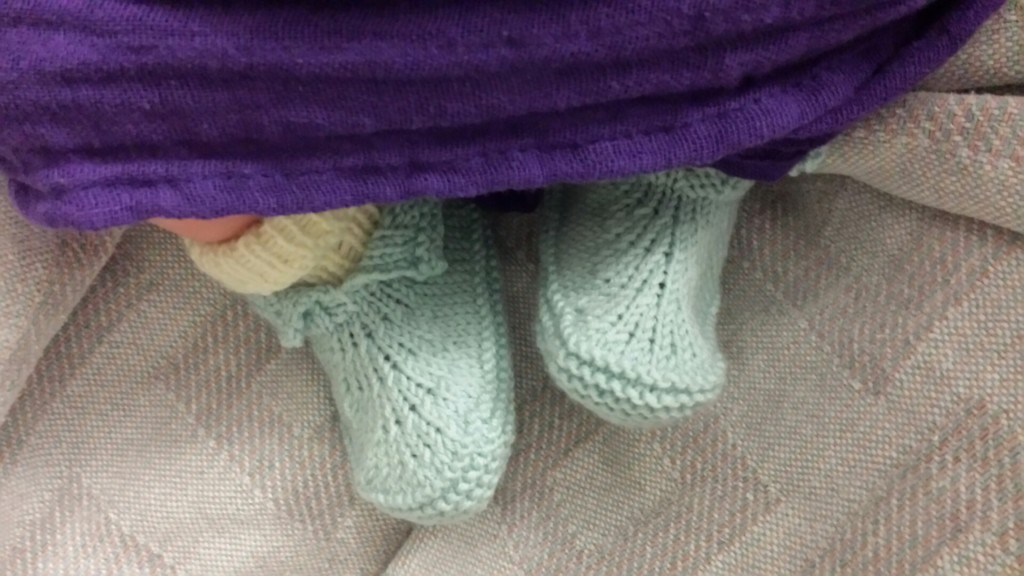 I started having signs of preterm labor at 35 weeks, so you can imagine my shock and frustration when at 41 weeks I was still pregnant. After 3 miscarriages maintaining a pregnancy is pretty exciting. But dudes, being 41 weeks pregnant sucks no matter how much heartbreak it took you to get there. It is uncomfortable, and you can’t make medium-term plans to do anything fun because you literally might explode at any moment. Which is to say, I still owe my dad an outing to see Star Wars.

Did you know there are many natural induction methods? If not, you will soon because everyone you meet will suggest them to you. With a sample size of 2 postdate pregnancies, I feel I can tell you definitively which ones work: none of them. I did enjoy the acupuncture and foot massages though.

I originally had an induction scheduled for Saturday night, but chickened out and moved it back to Tuesday morning. Something about being at the doctor’s office reminded me what childbirth is actually like and suddenly I was all JUST KIDDING I CAN STAY PREGNANT LONGER. Plus the prenatal testing came back great so I was no longer worrying that my baby was slowly expiring in my sad, defective womb. Admittedly after 3 miscarriages I also have very little faith in my body’s natural ability to make good choices.

On Saturday afternoon I had my usual “bullshit contractions,” which are vaguely more legit feeling than braxton hicks contractions, and last longer (maybe an hour or two), but never go anywhere. I had these almost daily for 4 weeks. I stopped paying attention to them. I got a pedicure, they went away. Then they came back! Then they went away. Chris started cooking dinner and I was like “FYI I might be in early labor, I’ll let you know in an hour.”

And hour later I was still having regular but mostly painless contractions so we called the doula to give her a heads up, and called my in-laws to pick up the 3 year old, still not really sure if this was legit. An hour after that I was having not-very-painful contractions 3 minutes apart, and was very confused about whether I should be going to the hospital now or not. My doula said it was either very early labor, or I was handling a fast labor very well. Without any real way to tell which was which I sat down to watch The Simpsons, and everything slowed down. I felt stupid for having called in the cavalry for more false labor.

At the doula’s suggestion I took a hot shower, and about 20 minutes later it was very clear that this was not false labor and that we needed to go to the hospital NOW. There was lots of cursing in the car. The security guard at the hospital did not need to ask why I was there (also no one else shows up to a hospital late at night carrying a yoga ball). Then I went to the PETU (I forget what it stands for but it’s basically labor triage) for THE WORST 20 MINUTES EVER.

For reasons that almost certainly involve lawyers, they need to get your baby on the monitor for 20 minutes at intake. This involves lying on a stretcher with a thingy strapped to you while you labor. THIS IS THE WORST. I have absolutely nothing positive to say about whatever lawyers suggested this was a good way for the hospital to cover their asses. During this part of the process I decided that unmedicated labor is for chumps and that I would probably like an epidural. The nurse encouraged me to wait until I was no longer attached to the Goddamned Monitor to make that decision.

Once freed from the Goddamned Monitor and reunited with my yoga ball the pain was indeed a lot more manageable. My doula arrived and after working through a few contractions I decided an epidural still sounded great. An OB checked me and said a bunch of numbers that describe my internal organs, the only one of which I remember was “6cm.” I was congratulated. I was then admitted to Labor and Delivery.

The next part is a blur and my husband and I disagree about the order of a few things. His memory is probably more accurate than mine.  I was repeatedly assured the anesthesiologist was on his way. It’s entirely possible this was even true, but within 20 minutes it was very clear to everyone that the baby was going to beat him there.  I had a bunch of truly miserable contractions, my water broke, I had a couple more miserable contractions, and then I started involuntarily pushing (still sitting on my yoga ball). I started freaking out because GUYS I DON’T WANT TO DO THIS WITHOUT DRUGS and my support team very lovingly explained to me that I was shit out of luck there.

I was herded onto the bed (even the progressive hippy hospital won’t let you actually pop your kid out onto a yoga ball), my midwife just barely managed to get her gloves on, and I started whining about how much I did not want to be doing this. I gave birth on all fours, not so much out of any choice but because there literally wasn’t time for me to try anything else. I also really had no control over the situation (because if I did I’d have quit). It took less than 5 minutes of pushing for a tiny baby girl to show up. It was about an hour and a half after I arrived at the hospital. Our car was still illegally parked out front.

Despite whining about the pain the entire time, I was actually sort of underwhelmed once it was over. Most of my anxiety stemmed from thinking the worst was yet to come, but it never did. I showed up at the hospital in a lot of pain but it never really got worse. I thought I was in “active labor” and kept bracing for “transition” and “ring of fire” kind of stuff. In reality I showed up in transition, and I think the ring of fire thing must only be for first time moms. Overall on a scale of 1-10 I give natural childbirth a 9. With the caveat that I don’t ever want to find out what 10 feels like. 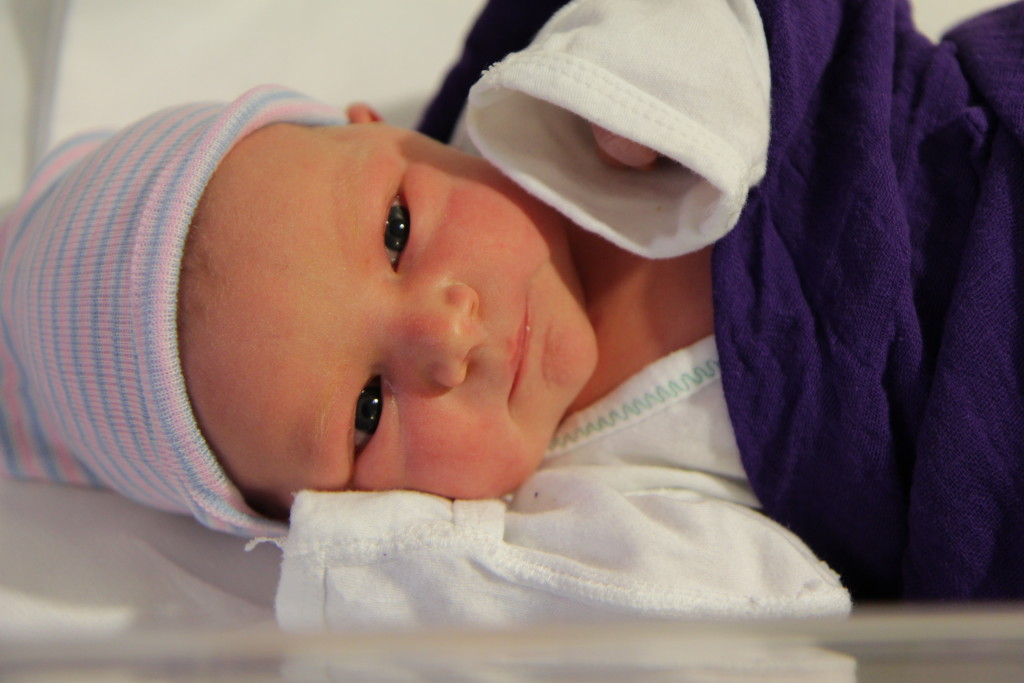 After the baby (who we named Ada) was out, I was given pitocin to stop some stubborn bleeding. Then my blood pressure refused to come down. And despite having way less tearing than with my first birth I ended up with a bunch of stitches because apparently some vein just refused to quit bleeding everywhere. It took about 3 hours for everyone to decide that things looked OK enough to send me on to postpartum recovery. Ada stayed with us the whole time and even managed to get some decent nursing in.

Ada was born slightly shorter and a pound heavier than her sister was. At just a few days old she already has her own personality. 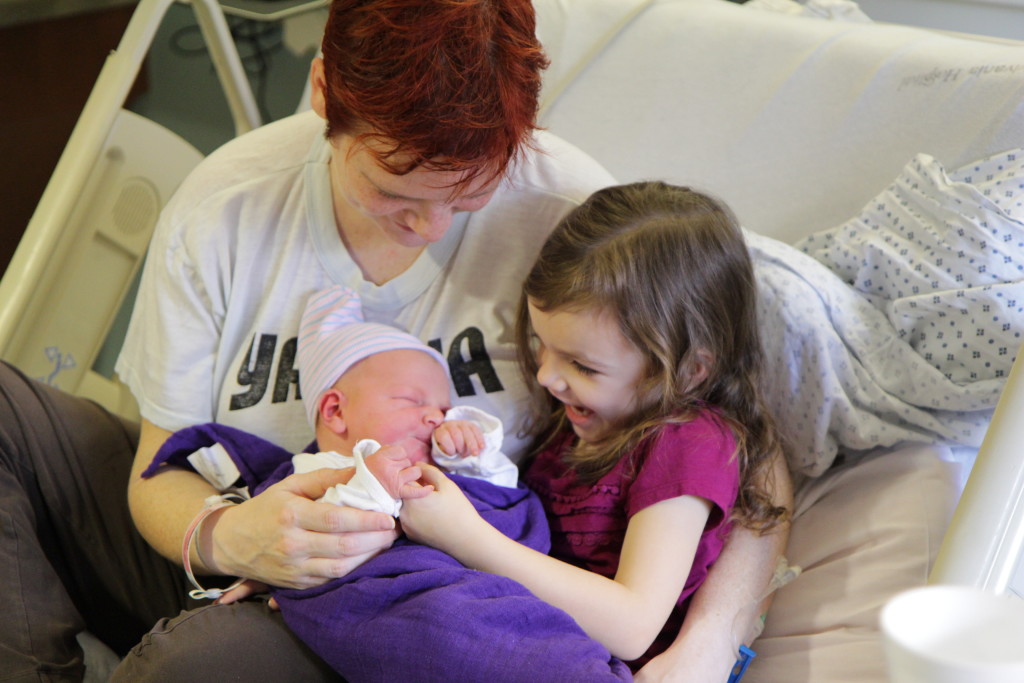