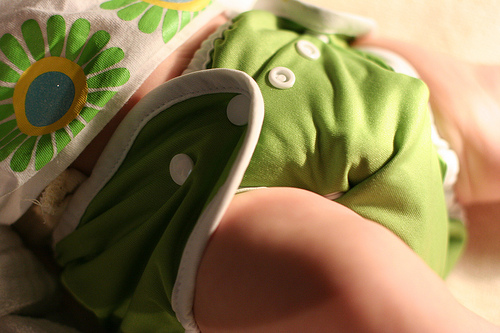 Anyone who knows me in real life knows I am not an earth-hugging hippie. To hell with “natural” products. I am a staunch believer in the miracles of modern science, and you can pry  my preservative-filled Tastykakes and DEET laden bug spray from my cold dead hands.

And now I’m cloth diapering, something labeled “too crunchy” for some of the crunchiest parents I know.

Why? Because my daughter is peeing us out of house and home. She can’t stand to be in a diaper that is even a tiny bit wet for any length of time. Other babies might pee two or three times between changes, but I’m throwing out 15+ diapers a day – most of which have only a tiny spot of pee on them. No there is nothing wrong with her, yes we asked her doctor. She just hates pee.

Not only is this expensive (~ 20 cents per diaper), but it’s creating a horrifying mountain of waste. Even I, the prototypical consumer who is far too lazy to do things like compost, am disgusted by the amount of garbage we’re producing here. And so I embarked on a cloth diapering experiment.

After contemplating a dizzying array of options (prefolds! all in ones! pocket diapers!) I purchased a 6-pack of osocozy prefolds and one Thirsties Duo cover. Worst case, if I hate it I can use the prefolds as burp cloths and give the cover to a cloth diapering friend.

Using these is pretty simple: you place the prefold in the cover sort of like a maxi-pad, and then snap the cover around your baby just like you would a disposable diaper. I swap out the prefold every time Bitmap makes a mess of it, and give the cover a quick once-over with a baby wipe. If she’s made a huge mess or I’m out of clean prefolds, I chuck the cover in a plastic bag with the dirty prefolds and we’re back to disposables until I run the wash.

So far it’s going pretty well. Since I’m already doing at least one load of laundry a day, throwing some diapers in with it is not a big deal. Because Bitmap is exclusively breastfed at this point, even her messy diapers aren’t too gross. They do however tend to stain the prefolds, which I’m told is just something I’ll have to get over.

The initial investment was $22, so if we replace 4 disposables a day with cloth they’ll pay for themselves in about a month. Maybe a little sooner, since we use a Diaper Genie pail for the disposables, which requires special bags (yes, I know, we’re suckers).

The good news is Bitmap is spitting up a lot less, so I’m not doing her laundry constantly. But since I’m not willing to run the wash just for 6 cloth diapers it means we’re only using them every other day or so. This is fine, and it’s still a financial win. At 20 cents per disposable, I need to replace 110 disposables with cloth to break even.  At this rate I’ll hit that the first week of September.

As soon as I mentioned trying out cloth diapers, a friend offered up some prefolds and a cover her son had outgrown, thereby doubling my stash! So now I’ve got 12 prefolds and 2 covers. One thing I’ve noticed is that many people who like cloth diapers are really into cloth diapering, so if you want to try it out without making a huge investment check to see if any friends have diapers they’d be willing to pass on.

A few people have mentioned diaper services, but the ones I’ve checked out in my area aren’t any cheaper than disposables. The good news is they’re not any more expensive either. Since finances are a big part of why I’m doing it, it just doesn’t make a ton of sense for us. As Bitmap moves up in disposable sizes (and therefore prices) it might be more of a win, so I’ll reevaluate in a few months.

I don’t think I’ll ever do cloth full-time, for a handful of reasons. Disposables are a lot more convenient when we’re out and about, as well as overnight. There’s also the question of whether I’ll keep doing cloth once Bitmap starts eating solid food. I’m not so sure I’ll be dying to launder Serious Business myself. But even if we only get 3 months out of these 12 diapers, we’ll be saving 540 disposables from the landfill and about $86 cash. I’m going to consider that a huge win.