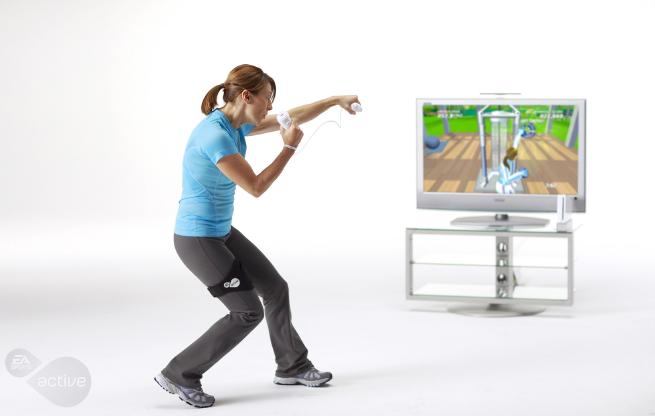 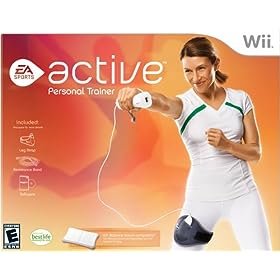 I caved to internet peer pressuer and picked up a copy of EA Sports Active. I was getting a little bored with Wii Fit, and sort of annoyed that it takes you 45 minutes to get in 30 minutes of exercise because you have to pick a new task each time… you can’t just queue up a workout.

Plus I wanted to see if it lived up to the hype.

So far Sports Active is being touted as THE MOST AMAZING EXERCISE GAME. As of this morning 100% of its reviews on Amazon were 5 star.

The game starts off like pretty much every other workout video/ad/pitch you’ve ever seen. Some guy in a fleece vest starts telling you how awesome and perfect your life will be once you follow him and stop being such a pathetic lump. There’s some upbeat ambient music to emphasise this point. It’s cheesy but inoffesive.

I started the 30 day fitness challenge because it required the least amount of thought. Over a 30 day period the game picks workouts for you each day, mixing it up and making sure you’re getting an even workout. If you don’t feel like doing that you can do any of the dozens of pre-programmed workouts or build your own. But, I’m lazy. If I wasn’t lazy I wouldn’t have bought an exercise video game, now would I?

After day 1 I’ll concede that it’s a strong title for the Wii exercise genre, and fills some voids Wii Fit left behind, but I’m not sure it’s my new religion. I had trouble getting some of the exercises to register – particularly the lunges. Overall things seemed a little sluggish – my avatar would follow me about 2 seconds behind. The balance board didn’t bring much to the experience, and I’ll probably leave it out next time just because it was one more thing I kept having to bring out / push out of the way.

The exercises themselves were pretty good, and things changed up pretty quickly so I didn’t have time to get bored… which was nice. I’ve had a hard time motivating myself to do 10 minutes of hula hooping now that my boyfriend isn’t around to appreciate the effort.

My biggest beef is that it felt cumbersome to switch back and forth between all the gear. Nunchuck in leg strap. Nunchuck in hand. Get on the wii balance board. No, with the nunchuck in the strap. Now stand on the resistance band. Oh but holding the nunchuck this time. Yeah.

It’s a title worth picking up if you want to add something to your exercise routine but don’t actually want to join a gym / go outside. Also it tells you how many calories you’ve (theoretically) burned, and that’s a lot like points. And you all know how I feel about points. I’ll post updates as I go through more of the workouts and get a better feel for the overall game. Program. Whatever.