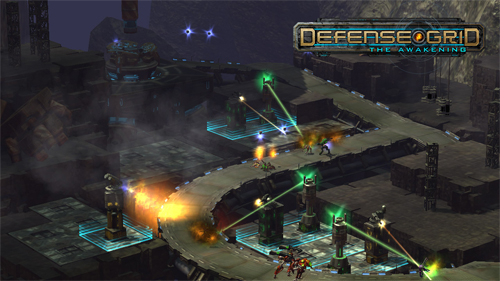 After three very busy months at Everything Tiny, I have been mostly vegetating over the holidays. The first thing that always happens after a busy period is a cold catches usa pharmacy viagra up with me. But now that I’m mostly well again, I’ve been playing the hell out of Defense Grid: The Awakening. The game normally sells for $10 on Steam, but it was on sale last week for $3. After playing for a few hours I decided it was definitely worth $10, and bought it on XBLA so I could play it on our giant TV… and rack up achievement points.

Defense Grid is an addicting tower defense game by Hidden Path. The gameplay is quick, although I made liberal use of the fast forward button, and can easily kill a few hours. Or days. The main story campaign is pretty meaty and once you’ve completed it a plethora of challenge / alternate modes for each map opens up. The artwork looks good, although honestly I spent most of the game zoomed out to see the whole map, so I didn’t have a ton of time to appreciate it.

The story line is simple but compelling enough. Defend your city against aliens with the help of a computer who speaks with a British accent and waxes poetic about raspberries. The aliens have come to steal your “power cores,” and in many maps they must walk out the same path they came in. Like most tower defense games, enemies come in waves of increasing toughness.  Simply surviving a campaign isn’t terribly difficult on most maps, I only lost all my cores once or twice, but setting up your towers so you don’t lose any at all can be a real challenge. Awards are given for the number of cores protected and resources remaining at the end of the scenario.

One interesting variation from many RTS / tower defense games is resource management. In many (Starcraft comes to mind) if you’ve got resources sitting around, you’re doing it wrong. Defense Grid gives interest on resources in the bank. Depending on how much you’ve got stashed away it can be a pretty significant boost, so there are often advantages to wait on putting down an expensive tower.

The game is overall very well balanced. There weren’t any tower types I didn’t really use, and the variety of aliens made it hard to get stuck in any one strategy. There’s good variety in the maps as well; some are about choosing the right types of towers for a limited number of spots, others are about placing them such that the aliens are routed along the longest path possible. There weren’t any points where it felt monotonous, although when being a stickler about not  losing any cores it occasionally felt like work. But that has more to do with my own problems with perfectionism than any fault of the game.

Defense Grid is emphatically worth the asking price, and a great way to spend a few hours. After playing it non-stop for three days (and some before that) I plan on taking a break before taking on the challenge campaigns. As it is I see lines of aliens every time I close my eyes, and have had the music stuck in my head since Christmas.