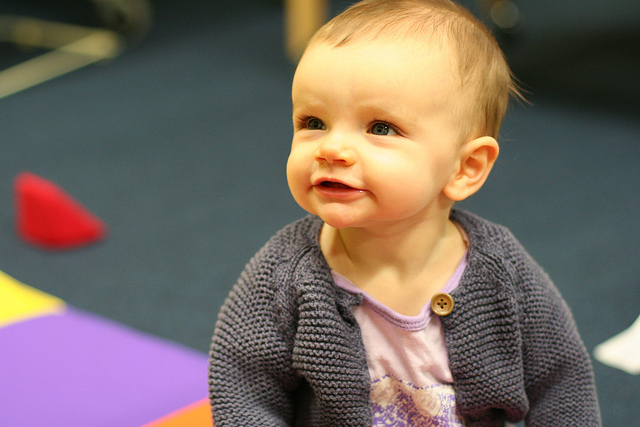 Bitmap started daycare today! I’ll be working outside the home three days a week (in addition to my freelancing from home) so we had a bit of a scramble to find somewhere she could go. Most of the daycare centers in our area had a waiting list of at least 4 months! We got very lucky though, Olde City Day School opened up a new center near us, and since they just opened there wasn’t a huge wait.

Bitmap was a little apprehensive at first… I was more than a little flustered myself. Getting us both out the door at a reasonable hour in the morning was a new experience, and I managed to forget about half the things she needed. Thankfully they do a “transition” week where she’s just there for a few hours a day, so she won’t need most of the stuff I forgot until tomorrow. I’m sure the daycare staff are much too nice to gossip about what an airhead I was this morning.

The director of the daycare center helped her feel at home. Within a few minutes she was having a blast in an exersaucer. Then we moved over to the play mats. She was so excited by all the new toys she immediately forgot I existed. I said goodbye and gave her a kiss on the head, but she even didn’t look up. I could hear her shrieking in happiness as I left the center. I also caught a glimpse of her attempting to pull herself up to standing… using another baby for support. Yikes. Hopefully daycare will help her learn that other babies are not furniture. Aside from a few meet ups in our neighborhood, this is her first real interaction with other babies. It’s bittersweet, for sure, and I miss her already (it’s been an hour). But she was having so much fun when I left I was able to shake off some of the mommy guilt. Hopefully she continues to like it as much as she did this morning!