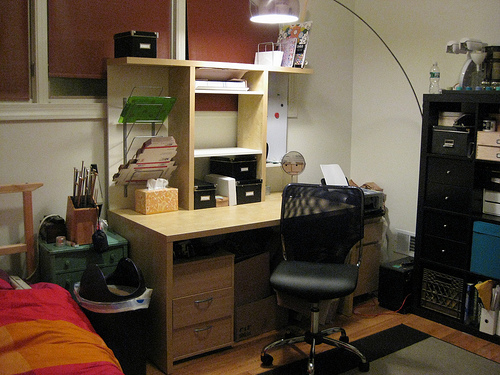 Uh yeah. There’s a workspace somewhere in there. Where, I’m not sure. As such operations had to be moved downstairs, the only place with any remaining horizontal surfaces. Oh any my plants died. The DIY aeroponics project was actually incredibly successful. But even pseudo-aeroponic systems need water added every few weeks. At this point, I was at a bit of a loss. If you look at my shelving unit, all the cubes are full. And yet there’s a ton of stuff lying around I don’t know what to do with. It’s hard to see in the pictures, but there’s a secondary workbench on the right which is also piled high with items in need of a place to be. And this is when you call in the big guns. Have a friend come over and help you, if you know anyone vaguely organized. Your friend will not only keep you motivated and prevent you from simply sitting on the floor staring at the mess (my mother has seen me do this just about every time I move), they’ll also keep you honest. They say things to you like, “Kelly, if you put that box in front of the magazine file and then need a magazine, are you just going to put the box on the floor and leave it there?” And then you (if you’re me) say, “… yes,” and find a better place for said box.