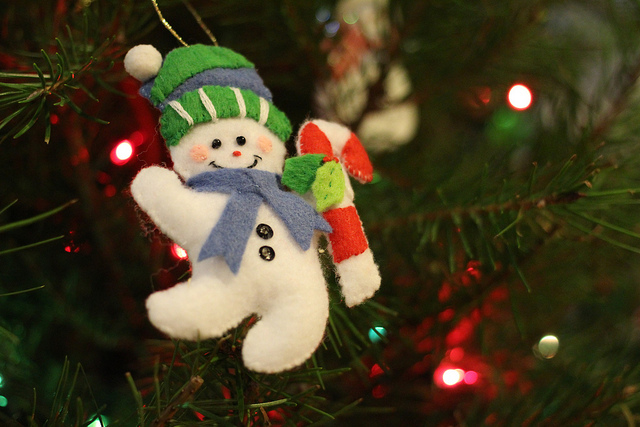 Christmas is practically a week-long event in our family, and this year was no exception. It’s our first Christmas in our new house, and we were very excited to get a tree. Our first stop of Christmasfest 2012 was a Christmas Eve dinner at RevolvingDork’s grandmother’s. She moved into an “active seniors” community last year and I think the ~20 of us overwhelmed some of the other residents. Bitmap, who has been in a much better mood the last few weeks, charmed everyone. She also stole the spoon from the dining room. Bitmap is really into spoons lately. It’s been great – we went out to dinner and she entertained herself the entire time with a spoon and a couple packets of sweet ‘n’ low.

We went to mass at 8pm, and although Bitmap was in a good mood she was LOUD so we spent most of the service in what RD calls the “baby penalty box.” It’s a plexiglass-walled room off to the side with the audio from mass piped in. It had an attached bathroom with changing table. It’s like the Catholic church is used to babies or something. Christmas morning was pretty exciting, we got Bitmap two toys and some clothes. She was mostly excited just to rip the paper off the packages. She also got some baby rice crackers in her stocking. She’s not really sure how she feels about them, but she ate the whole thing.

After breakfast we went to RD’s parents’ for Round 2, and his other grandparents’ for Round 3. By the end of the day Bitmap had at least quadrupled her toy collection. Although to be fair she didn’t have more than a dozen or so toys to begin with.

I knit gifts for a few people each year, and this year my husband and in-laws got knit items. My father-in-law got a pair of handknit socks and a bottle of scotch. My own parents came up to visit the day after Christmas, and somehow I managed to not get any photos of their visit despite (or perhaps as a result of) getting a new camera body from my dad. It’s been a wonderful, exhausting week.