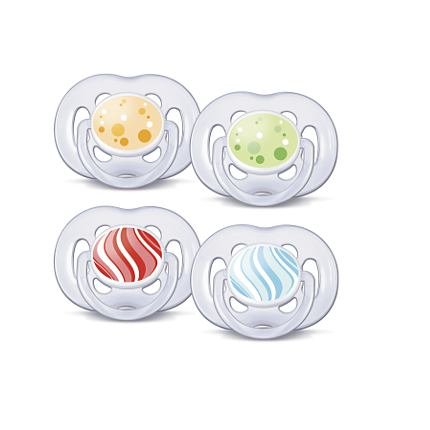 I think pacifiers are disgusting. I realize that the pacifier debate has a lot more to do with the fact that they bother adults rather than causing problems in infants. But I still think they’re gross, and wanted to put off introducing our daughter to one as long as possible.

like it was my new bible. The only thing that vaguely calmed her was nursing and sucking on my pinkie finger, neither of which are things I can do while I sleep. So caved and introduced her to a pacifier. I worried about it affecting her latch and causing nipple confusion. But more importantly both RD and I were concerned about the lack of sleep wearing down my mental health, so I popped the infernal device in her mouth. And she was magically quiet. And I felt completely inferior to a little nub of plastic.

Now that I’ve slept, I have made my peace with the stupid thing. I feel a little better that sometimes when I offer it to her she reaches up, grabs it, and pulls it out of her mouth and looks at me like I’m a moron. As if to say “no, I want the real thing.” It’s the most deliberate use of her hands I’ve seen so far.  So she hasn’t completely abandoned me for the pacifier. She’s still trying to figure out how to get her own fingers into her mouth, but I think in another week she might get there.

We also introduced her to her first bottle of expressed milk. I wanted to put it off another week, per recommendations from lactation consultants, but in the interest of my sleep sanity RD needed to be able take some of the night feedings. I was terrified that she’d decide she preferred the bottle to me and that would be the end of breastfeeding. And I still am. If breastfeeding is awkward, pumping is downright ridiculous looking and getting a bottle ready / cleaning it afterwards is so much more effort than just popping her on a boob.

Like most new parents, I’m learning that there are some things you just have to let go in favor of something more important. Like sleeping for more than an hour. A baby who nurses well isn’t as important as having a mother who can think straight. And thankfully neither the pacifier the bottle hasn’t affected her latch as far as I can tell. She’s still my little lamprey.