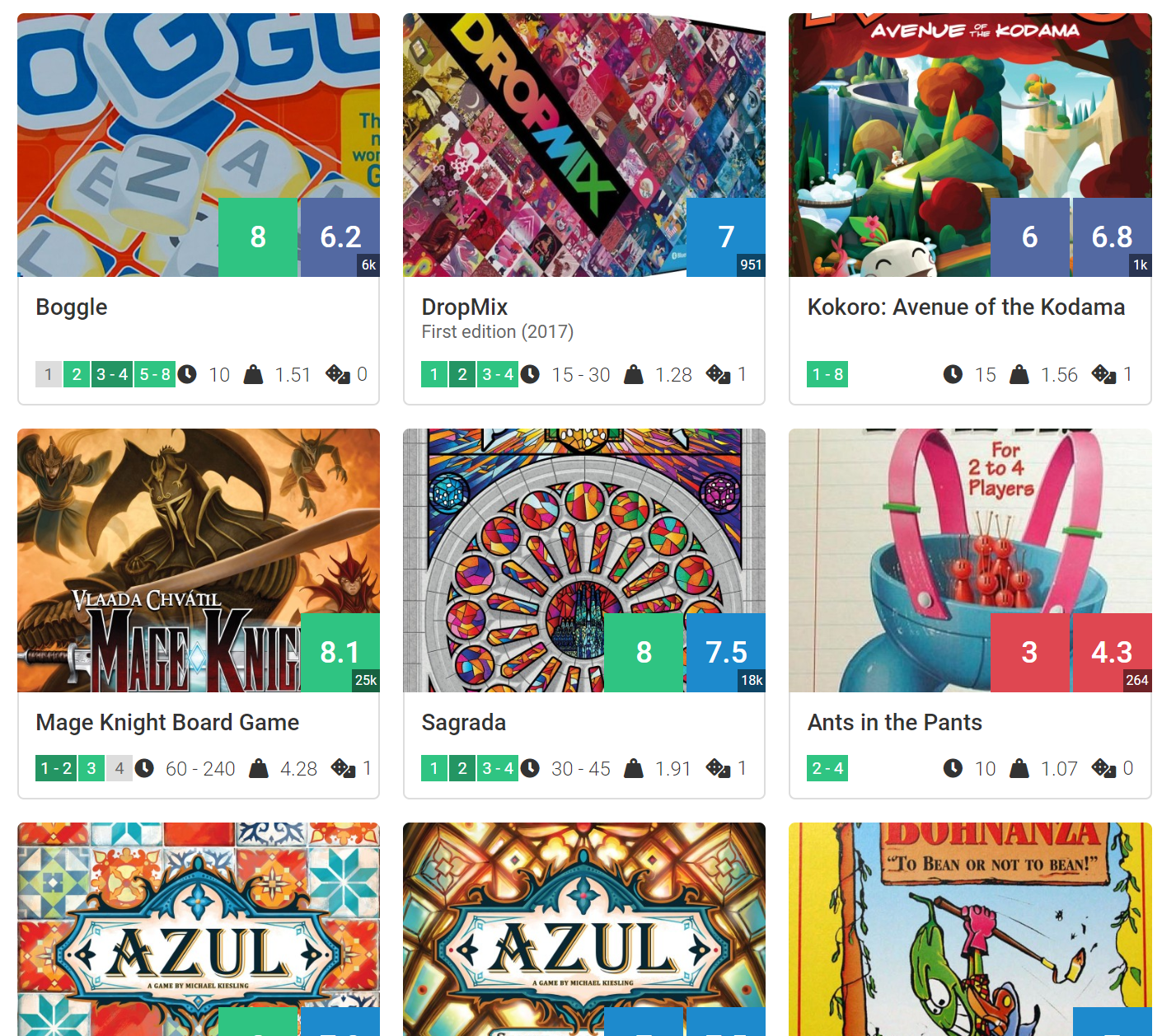 The past three years we have attended PAX Unplugged and the general pattern goes like this:

This came to a head this past Chrismas when I went to put away some games we’d gotten as gifts (Mega City: Oceana and Ticket to Ride: London) and there just wasn’t any room on the shelf. As I shuffled things around I came across games we’d only played once, games we’d never opened, and games I swear I’ve never seen before. It was then I realized there needed to be a Reckoning.

What even is all this stuff?

The first step in getting organized is figuring out what you have so I set out to inventory my games. I started out with a spreadsheet but quickly decided to switch to using my account at BoardGameGeek.

The awesome thing about BoardGameGeek is that is has a really comprehensive database of pretty much every tabletop game. The less awesome thing is that the UI is completely overwhelming and I didn’t find out until after I was done entering everything that there were some shortcuts I could have taken (namely the tiny ‘add game’ button at the top of your collection list).

Once it was all in BGG I connected my account to a site called GeekGroup.app which has a very nice UI and got this easy to digest list of games:

What’s also neat is you can make a group collection with friends who have done the same. This does mean badgering your friends into logging everything in BGG, but the reward is a list that makes it easy to see who owns what (and thus whether you can leave Galaxy Trucker at home because there will be a copy where you’re going.

I came across the idea of a 10 by 10 challenge wherein you set out to play 10 games 10 times in a year (or other timeframe of your choosing). You can decide how strict you want to be (I’m allowing myself to swap out games if I really start to hate them)

I don’t have a fancy board so I’m using a phone app called BGStats to track my plays. Each time I play a game I log who I played it with, what the score was (where applicable), and who won. I hand picked 6 games that I want to play this year (Chaturanga, Eclipse, The Expanse Board Game, Mage Knight, Pandemic Legacy, and Power Grid) and the other four will auto-fill in the app based on whatever I’m playing the most.

Now that I’m tracking my games I suddenly have all this data! Data which can be used to generate… MORE STATS AND VISUALIZATIONS.

GeekGroup has a bunch of different ways to visualize your playing. There’s the streaks and records page:

But what I really love is the playback visualization which walks through the timeline of your plays. Check it out on the GeekGroup site to get the full effect.

I’m heading into 2020 with a goal to get to know my game collection better (and jettison anything we just don’t like to play). I’m excited to dig into some games that I’ve only played once or twice, and even more excited at the idea of getting away from Weekly Rules Explanation Night by playing repeats.