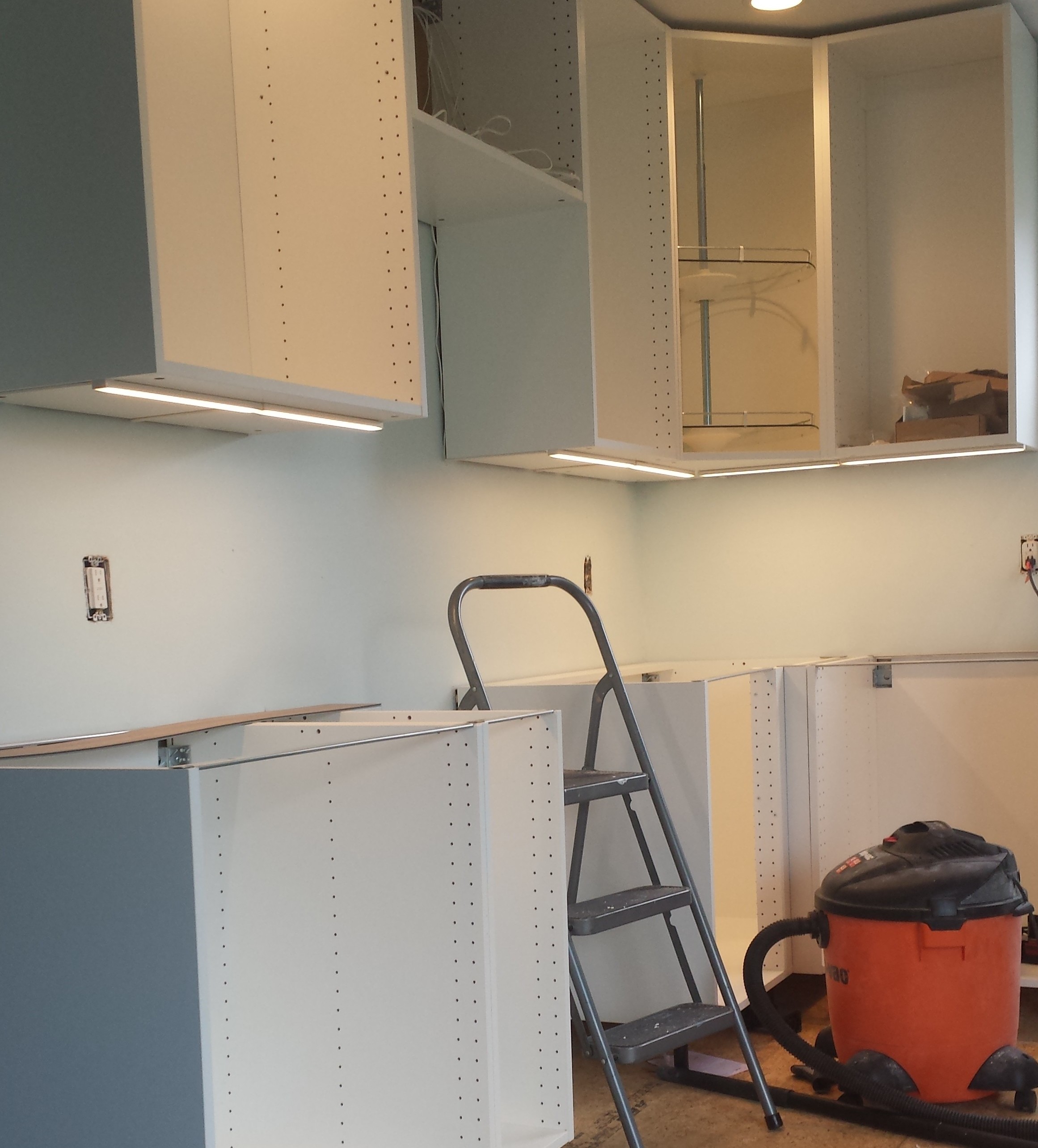 The past few weeks have been a lot of two steps forward / one step back in the kitchen. While tidying up the remaining boxes of kitchen stuff I came across the cabinet lighting, and thought “huh I wonder when I’m supposed to install these.” I’ll tell you…. before you secure the wall cabinets. Oops.

Installing the  Omlopp lights was kind of a pain. There are 6 light strips under my cabinets and getting them all lined up right was surprisingly tough, despite measuring everything. This is one place where oblong mounting holes that let you adjust would have been greatly appreciated, but weren’t provided. I also found that the directions are sort of backwards. They tell you to install the cord cover first, then the mounting strip,  then clip the light to the mounting strip. But it’s much easier to clip the cord cover loosely over the cord, mount the light, and then just stick the cord cover to cabinet wherever it lands.

I think most people put the transformers and cords above the cabinets. I don’t have the clearance up there so everything is going in the cabinet above the stove and I’ll put a shelf near the top to keep it mostly hidden away. There’s already an outlet in that cabinet for the microwave so the lights will be on the same circuit.

There are also two round recessed lights inside the end cabinet (which has glass doors and shelves). With the cabinet on the ground I used a 2.5″ hole saw to cut holes and then pushed the lights up into them with the cord coming out the top. I used some painter’s tape to keep the wires from flopping around and getting in the way when we put the cabinet back on the wall.

I opted for the plug-in lights because I didn’t want to deal with hardwiring them in. The transformers they plug into have a remote, but the transformers buzz whenever the remote is off. They don’t make noise when the light is on. I don’t know if I just got two duds, or if this is a widespread problem with the Ikea Ansulta transformers. Hopefully replacements will fix the problem.

I’m happy with how they turned out but a little discouraged by the buzzing issue, which I suspect is due to poorly engineered circuits in the transformers. I don’t mind losing the dimmer if it means getting ridding the noise.